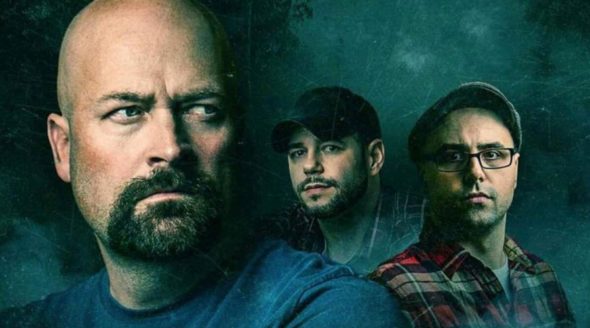 Ghost Nation is coming back for its second season to Travel Channel next month. Jason Hawes, Steve Gonsalves and Dave Tango are back helping more people take care of the ghosts haunting their homes.

Travel Channel revealed more about the return of the series in a press statement:

“Jason Hawes, Steve Gonsalves and Dave Tango, the paranormal investigators responsible for igniting the ghost hunting phenomenon, are back for more adventures to the other side. The second season of the hit Travel Channel series, Ghost Nation, premieres on Wednesday, April 22 at 8 p.m. ET/PT with a special two-hour episode, and then returns with a fresh batch of weekly one-hour episodes airing at 9 p.m. ET/PT.

This season’s locations have bigger mysteries, are more chilling, and have never been investigated on television. Not only will the team be helping distraught homeowners, they’re also bringing their skills to an abandoned prison complex and a menacing tattoo parlor. And this time, they are calling in an old friend for some help. Paranormal investigator Shari DeBenedetti joins the investigations to keep a close eye on the monitors, reviewing footage on the hunt for all things paranormal.

“After 15 years of hunting ghosts, we know that finding evidence of paranormal activity won’t be enough to solve these problems entirely,” said Hawes. “We need to get to the source of the disturbance to bring these families much-needed peace, or else innocent people will continue to suffer. Since these are high-stakes personal cases, fans will see double the evidence and double the scares – all season long.”

On all investigations, collecting evidence is just the beginning. The team isn’t just parachuting in to conduct a cursory review of the case. With the help of their local contacts, they’re going to embed themselves in the community, conducting multi-day investigations in an effort to track down the true source of these hauntings and restore peace to the living.

Under the United Paranormal Research Organization (UPRO) banner, it isn’t only Hawes, Gonsalves and Tango facing off against an unseen entity. Local paranormal groups, sometimes even the homeowners themselves, will join the team as they employ new devices and techniques for confronting and questioning spirits. They’ll do whatever it takes to entice the ghost into telling its story and stop at nothing to get to the bottom of the paranormal phenomena. New locations this season include: Louisburg, North Carolina; Warwick, New York; Waynesville, Ohio; Biglerville, Pennsylvania and Blair, South Carolina.”

What do you think? Did you watch season one of Ghost Nation? Are you excited for the return of this series?

Are there any new episodes airing? Only six season two shows so far, is that going to be all? No new show last night and nothing on the schedule for next Wednesday either. Is there a problem?

Love it!! Keep the shows coming. Jason, Dave and Steve look for answers and skip the drama and psychic fillers.

This show makes those other shows seem like cartoons…This is a GREAT show! My wife and I watch it all the time.

I love the show, very down to earth and it shows that the here after isn’t all evil, thank goodness! Keep up the good work.

I love the show. It’s more informative and it does seem to get to the bottom of things.
Keep up the good work.

Love it better than shows that only delve into bad demons. More realistic

Love it they seem more real than the shows that delve in bad demons.

Loved the first season and looking forward to seeing the next. I never gave up waiting for them to return. Would give anything to experience something if I was with them.

I liked them on Ghost Hunters on SYFY, but i just can’t get into this show, for some reason. I greatly prefer Kindred Spirits with Amy & Adam.