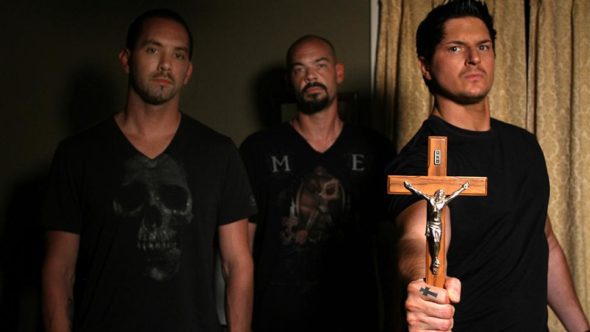 Travel Channel is ringing in the new year in a spooky fashion. Recently, the network announced they are airing a two-day marathon of Ghost Adventures in celebration of New Year’s Day.

The hit series follows paranormal investigators Zak Bagans, Aaron Goodwin, Billy Tolley, and Jay Wasley as they explore locations across the U.S. with a haunted history.

Travel Channel is ringing in 2019 with a two-day marathon of its wildly popular, hit series “Ghost Adventures,” featuring Zak Bagans, Aaron Goodwin, Billy Tolley and Jay Wasley – the paranormal investigative team who boldly go where most fear to tread. Beginning Monday, December 31, the lineup will feature some of the series’ most terrifying and unforgettable episodes from recent seasons – including “The Slaughter House” featuring superstar Post Malone, “The Titanic Museum” and “Return to Winchester Mystery House.”

The marathon culminates in the television premiere of Zak Bagans’ film, “Demon House,” on Tuesday,

January 1. The documentary follows Bagans’ investigation of a Gary, Indiana, home he purchased sight unseen, after learning about its demonic history. Immediately following the film’s network debut, Travel Channel will premiere the one-hour special “Demon House: Lost Footage,” revealing exclusive, never-before-seen footage from the documentary, along with special commentary from Bagans about the unforgettable and terrifying experience.

“As Zak’s TV family, we are excited to feature his incredible film and nourish fans with never-before-seen extra content,” said Jane Latman, general manager, Travel Channel. “And what better way to ring in the New Year than from the edge of your seat!”

Next, in a two-part “Ghost Adventures” special, the team investigates one of America’s most haunted towns – Alton, Illinois. Known as the River Bend region, Alton is situated just north of St. Louis, Missouri, and is rife with dark history.  Bagans and the crew investigate the area’s most haunted buildings in “Curse of the River Bend” – premiering on Saturday, January 5 and Saturday, January 12.

In each episode of “Ghost Adventures,” Zak Bagans and Aaron Goodwin, along with A/V techs Billy Tolley and Jay Wasley, travel to a different haunted destination where they meet with locals, eyewitnesses and experts in an attempt to piece together the haunted history of each site. They then begin a dusk-to-dawn “lockdown” investigation, using the latest scientific gadgets and technology in an effort to obtain physical evidence of the paranormal and uncover the truth behind each haunted mystery.

In 2014, the story of a demon possession in Gary, Indiana, caused a worldwide media sensation. Paranormal investigator Zak Bagans was producing an episode of his popular television series, “Ghost Adventures,” when the story broke; he bought the house a day later over the phone, sight unseen. But Bagans and his crew were unprepared for what awaited them at the house possessed by “200 demons.” Bagans soon suffered from a debilitating illness, crew members quit and people nearly died … Bagans even started to wonder if just viewing the film could open audiences up to possession themselves. Had he made a movie too dangerous to release?

This exclusive special reveals never-before-seen footage from Zak Bagans’ film, “Demon House,” a documentary that follows Bagans’ investigation of a haunted Gary, Indiana, home he purchased, sight unseen, and is believed to be possessed by demons. The hour-long special features commentary from Bagans about the home and its backstory, the terrifying investigation and unseen evidence.

The team travels to Alton, Illinois, a town considered by many to be one of the most haunted places in America, to investigate a Victorian mansion with a rich history and reports of dangerous paranormal activity.

The crew concludes their two-part investigation of Alton, Illinois, at the Mineral Springs Hotel. The 1914 structure has been witness to multiple deaths, and Zak Bagans believes a demonic entity is keeping these lost souls trapped inside the building.”

What do you think? Are you a fan of Ghost Adventures? Will you watch the marathon?

Hello Ghost Adventures relunctily writing you stay with your show great show its your life LIVE LOVE and laugh have fun alot more adventures ahead bye.

I’m glad Ghost Adventures is cancelled. It started out leaving you going-humm. Then Arron and Zack began over-acting and showed the series as fake. Once more, hmmm.

I’m glad Ghost Adventures hasn’t been canceled like was reported…it’s hands down the best paranormal show out there..

I watch ghost adventures but am really getting tired of how dumb Aaron acts. If he thinks being over dramatic adds to the show he’s very wrong

I think everyone on that show is overacting! Someone feels something come over them and feels like killing or punching them! I believe in the supernatural and my house is in fact haunted but it doesn’t bother me at all it’s more mischievous than anything. Even if it was horrible and I needed help I would never call those overdramatizing fools! That’s just my opinion so hey if you enjoy watch it.

I rarely watch Travel Channel anymore. One or two of this type of show is ok but now it’s nothing but. Ghosts, monsters, UFO’s, the dead and other supernatural crap shows. Travel Channel is dead……