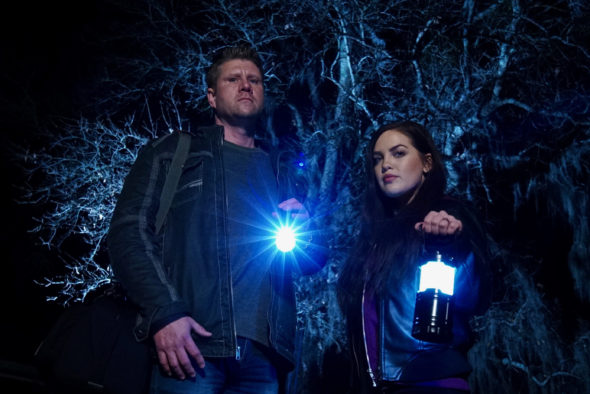 Ghost Bait is being brought back to life. Travel Channel just announced they’re reviving the TV show for a new season.

The paranormal docuseries Bob Magill and Tina Storer as they help those dealing with intense supernatural experiences by using “a shocking but effective method of isolation combined with sensory deprivation.”

The new season of Ghost Bait premieres on Travel Channel on April 4th at 10 p.m. ET/PT.

NEW YORK (March 12, 2019) – Paranormal pioneer Bob Magill and empathic investigator Tina Storer take on frightening, personal hauntings in America in the cult classic “Ghost Bait,” lured back to television and premiering on Travel Channel on Thursday, April 4 at 10 p.m. and 10:30 p.m. ET/PT with 12 half-hour episodes. Using a shocking but effective method of isolation combined with sensory deprivation, the duo helps people overcome their fear of intense paranormal activity. After conducting their own paranormal investigation, Magill and Storer use their findings to elevate a client’s fear level and then use that terror as bait to draw out the entity and force a confrontation. By facing their worst fears head on, Magill and Storer believe the living can overpower the negative forces around them to reclaim their sense of peace and control.

“Bob and Tina are two of the most dedicated paranormal investigators out there, and the unique way they conduct their investigations will keep you on the edge of your seat. And fans can’t help but root for the haunting victims as they’re forced to face their worst fears,” said Jane Latman, general manager, Travel Channel.

In the premiere episode, Magill and Storer travel to the historic Brookdale Lodge in Santa Cruz, California, to investigate claims of an evil spirit bullying an employee named Agnes. The paranormal investigators discover the once famed hotel has a dark history filled with mysterious deaths and corruption. Agnes must overcome her deepest fears and challenge the oppressive entity plaguing her in order to continue her livelihood at the hotel. Isolated in the pool room, an area known for frightening activity, Agnes confronts the entity – alone. In the second episode of the night, Magill and Storer head to Monongahela, Pennsylvania, to investigate claims of paranormal activity terrorizing a young couple in their new home. During a chilling late-night investigation, the duo come face to face with a mysterious presence in the woods and capture a terrifying voice inside the house that repeats the phrase, “in a portal.” As a last resort, homeowners, Jason and Nina, are forced to confront their fear of the evil demon in order to reclaim their house.

Check out “Ghost Bait” on TravelChannel.com for behind-the-scenes videos, photos and more from the all-new series. Follow @TravelChannel and #GhostBait for more exclusive content and updates.

What do you think? Have you seen Ghost Bait? Will you watch the new episodes?

Thanks for sharing such good information

Hands down worst paranormal show ever to hit the airwaves. Whoever green lighted this crap should get demoted. Not only is the burlap bag utterly laughable but the yelling for 3 minutes does not magically get rid of any spirit or demon. It’s totally reckless.

I had watched Ghost Bait never again will I watch a (in my opinion) terrible show.. Seems fake.. If others like it good for them..

NO I didn’t like the show… putting a potato sack over someone’s head is just weird and laughable… just couldn’t take it serious….What’s wrong with a simple blind fold… seems like they make things worse and antagonize than leave the victims to deal with the aftermath…..

John Fossell Terrible put in harms way automatically though be lucky if somebody doesn’t get hurt ., kind of a joke !! Sorry get a little More real !!

I absolutely agree!! I can guarantee you the next day when the individual went back to work or whatever things were 10x’s worse!! They didn’t nothing but cause more issues & problems. ANY paranormal investigator or someone with a brain knows not to taunt a demon/bad spirit. Those people are ridiculous

Terrible— the burlap sack is totally ridiculous—can this show!

Could someone tell me why a burlap bag works better than a blindfold? I think this is a dumb show with a bunch of staged crap. What makes anyone think you can get rid of deamons and ghosts by confronting them. this is just a stupid show……….

Show is full of staged occurances. Medium is so scared of everything and cursing to point I turn it off. How can you help people if your panicing . Cancel yesterday would have been better.

Ghost Bait, episode Emma and Kelly 5/2. When the “ghost” turned on the lamp the first time, Tina turned to look at it and the dowsing rods crossed over with the right one going very near, if not all they way to her left hand. When the camera shot switched to face her looking at the lamp, the forks were crossed more to the middle. When the camera went back, the forks were still in the first position and stayed there as she turned to face Bob again. She did a fine job acting shocked through every take. Not her… Read more »

Ugh no
Reply to  Ugh no

Don’t know why I kept calling them forks. I meant rods. 🙂

I tried to watch it but I just don’t think it is what I like.Some of these Ghosts or Demons cannot be rid of by just facing your fears. A lot of times it takes more than that. Another problem I have there’s a commercial about every 6 minutes. I just can’t get into this series. It’s not for me.

If this show was cancelled after 3 episodes the first time in 2013 who thought it would be any better the second time around. I have watched many of these type shows on the Travel Channel and other networks, some good, some not. But this shows rates right at the top for one of the worst paranormal shows on TV

I agree! I like Ghost Adventures, and Dead Files But this series here isn’t that good.Every 6-8 minutes there is a commercial.Sometimes it takes more than facing your fear to get rid of these spirits.I tried to watch it for 2 straight weeks but I just can’t get into it.

Couldn’t agree with you more