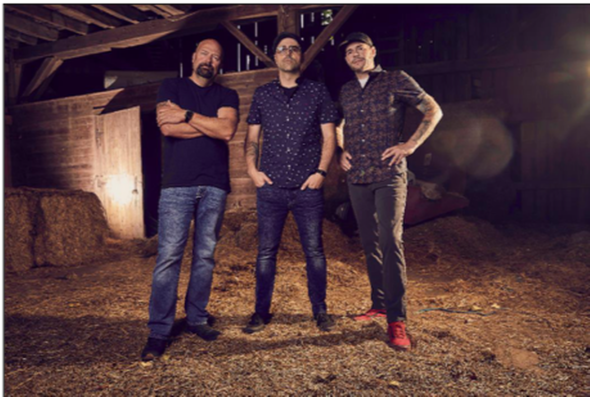 Get ready for Ghostober on Travel Channel with the return of Ghost Nation. The series will return with brand new episodes in October, and a Halloween reunion special has Kindred Spirits’ Amy Bruni and Adam Berry reuniting with Ghost Nation’s Jason Hawes, Steve Gonsalves, and Dave Tango for a special investigation.

Travel Channel revealed more about the return of Ghost Nation in a press release.

Paranormal sightings are on the rise and we need these guys now more than ever. Jason Hawes, Steve Gonsalves and Dave Tango, the paranormal investigators responsible for igniting the ghost hunting phenomenon, are back this Ghostober with all new episodes of the hit Travel Channel series, Ghost Nation, premiering on Saturday, October 17 at 9 p.m. ET/PT. Each one-hour episode spotlights locations with bigger, edgier mysteries, the danger is more in focus and the mission and what’s at stake are always in the forefront for the team. Not only will the team be helping terrified homeowners, they’re also investigating a deadly, abandoned glass factory, a demonic tattoo parlor and a mansion with a secret room sealed shut for a century, all to help people and their businesses survive. And they are joined by paranormal investigator Shari DeBenedetti to keep a close eye on the monitors, reviewing footage on the hunt for all things paranormal.

Revelers can celebrate Halloween night with the ultimate series crossover, joining forces with old friends Amy Bruni and Adam Berry from Kindred Spirits. The ghost hunting teams reunite for the first time in nearly a decade (they starred together on SYFY’s Ghost Hunters) to explore frightening activity inside an illustrious Newport, Rhode Island, mansion in Ghost Nation: Reunion in Hell, a special two-hour episode premiering Saturday, October 31 at 8 p.m. ET/PT.

“We are ecstatic to get back to doing what we love, and we have some incredible cases to share,” said Hawes. “We were able to reconnect with our longtime friends Amy Bruni and Adam Berry. It seemed like time had stood still over the last 10 years as we rolled right into investigating and gathering some mind-blowing evidence and experiences.”

“Working with Amy and Adam was an absolute blast and the investigation was phenomenal. It was really interesting meshing our techniques together and it yielded some amazing results,” said Gonsalves.

“You’ll also be seeing some other familiar faces this season as well,” adds Tango. “I’m hoping the more people tune into Ghost Nation, the more they will see how accessible we are. We’re here to help everyone, and thankfully, having so many investigators in our network makes it possible for us to do that.”

On all investigations, collecting evidence is just the beginning. With the help of their local contacts, the team embeds themselves in the community, conducting multi-day investigations in an effort to track down the true source of these hauntings and restore peace to the living. Under the United Paranormal Research Organization (UPRO) banner, it isn’t only Hawes, Gonsalves and Tango facing off against an unseen entity. Local paranormal groups, sometimes even the homeowners themselves, join the team as they employ new devices and techniques for confronting and questioning spirits. They’ll do whatever it takes to entice the ghost into telling its story and stop at nothing to get to the bottom of the paranormal phenomena.

In the premiere episode, “Evil Ink,” Jason Hawes, Steve Gonsalves, Dave Tango and Shari DeBenedetti investigate the paranormal events plaguing the Zone13 Tattoo and Body Piercing shop in New Jersey. They head to the town of Deptford to investigate the tattoo shop where disturbing apparitions, disembodied voices and even physical encounters are threatening the business. After their own investigation, it seems that whatever noises the team are hearing are following them as they move. With all these strange happenings and fresh evidence, the UPRO team will determine if the shop is actually haunted by one of the property’s former owners, a woman named Bertha.

“Ghost Nation: Reunion In Hell” – Premieres Saturday, October 31 at 8 p.m. ET/PT (Two-Hour Crossover Special With Amy Bruni and Adam Berry From “Kindred Spirits”)
In this spine-tingling, two-hour Halloween special, “Ghost Nation” stars Jason Hawes, Steve Gonsalves and Dave Tango are calling in their old paranormal pals, Amy Bruni and Adam Berry of “Kindred Spirits,” to reopen a case that has taken a sinister turn. Seaview Terrace is the 40,000-square-foot Rhode Island mansion famous for being featured on the TV show “Dark Shadows,” but the owners were shocked to find out that a recent visitor – a self-proclaimed warlock – had performed some sort of blasphemous ceremony in the house. Now, they’re experiencing a shift in the mansion’s energy, unleashing something more menacing. The team scours 100 years of history to discover a notorious patchwork past, filled with lavish high society parties and possibly a scandalous murder.

What do you think? Are you a fan of Ghost Nation on Travel Channel? Will you watch the new episodes and Halloween special next month?

I can’t wait. I wish they all were on weekly! I will enjoy every minute and I hope that Ghost Nation and Kindred Spirits would be renewed! Love, love , love the two shows!

I really love the show,, but I wish that they could go Places were it’s more scarier and more exciting

I love the show, the team etc, HOWEVER the over produced sound effects ruin the authenticity and you can’t always hear the activity by the effects that are not necessary.

So glad to see the guys back for another season. Hopefully many more to come

Absolutely I am a HUGE fan I even go back and watch older episodes when the season is over to get my fix,lol❤❤

Yes definitely, I have been waiting for them to be back. Love the show and the team.

So excited for the Halloween reunion!! being a long time Dark Shadow fan, Seaview Terrace will be a interesting investigation!!