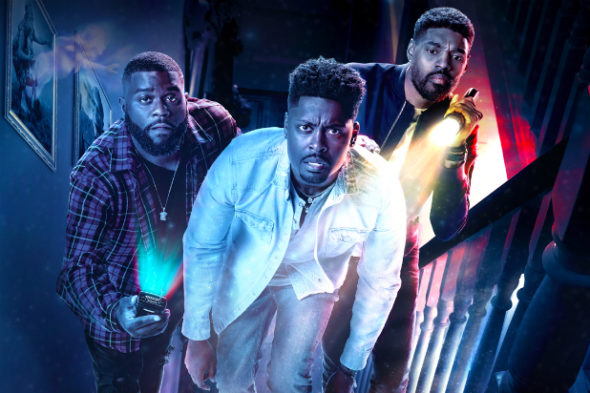 Travel Channel is about to get spookier. The network just announced the premiere date for their new TV show, Ghost Brothers: Haunted Houseguests.

The docuseries will follows best friends and ghost hunters Dalen Spratt, Juwan Mass and Marcus Harvey as travel across the country and investigate claims of paranorma activity.

In “Ghost Brothers: Haunted Houseguests,” the trio of intrepid sleuths respond to pleas from families experiencing paranormal activity in their homes.  Traveling across the country to answer the calls for help, Dalen, Juwan and Marcus move right in to embed themselves with eight different families for a weekend slumber party of spiritual proportions!  The goal is to investigate each family’s paranormal claims and bring peace to the home’s inhabitants, both the living and the departed.

“Dalen, Juwan and Marcus have such a fresh take on paranormal investigation with their larger-than-life personalities fueled by their passion to help people,” said Matthew Butler, general manager, Travel Channel.  “We’re thrilled to bring the Ghost Brothers to Travel Channel in this new Haunted Houseguests format, which allows them to really connect with families in need.”

In Tennessee, the Ghost Brothers help a family move safely back into house that they couldn’t sell (and they couldn’t afford to walk away from). In Washington state, they check out an infamous family manor plagued by ghosts and rumors of an evil doctor and his victims. And in New Hampshire, they explore a historic home and inn that may be harboring the spirits of people fleeing slavery on the Underground Railroad.

With a unique friendship and valuable life experiences, Dalen Spratt, Juwan Mass and Marcus Harvey blend humor, heart and hair-raising paranormal discoveries to bring fresh stories in “Ghost Brothers: Haunted Houseguests.” The three friends initially bonded over the paranormal phenomenon they each experienced as children, and now have a shared mission to help families who are plagued by the paranormal, too.

Disabled Marine Corp veteran Conrad Dowe had big dreams of renovating a historic mansion in Vassar, Michigan, dubbed “Wedding Cake House.” Almost immediately after carrying his new bride, Jessica, over the threshold, the spirits in the house revealed themselves and let the Dowes know they were not alone. For years the family, including their young son Xavier, has seen a dark shadow figure they named the “Bad Man,” and a female spirit who Jessica calls the “Protector.” This family needs protecting.  One violent paranormal event landed Jessica in the hospital with life-threatening injuries. This family calls on the Ghost Brothers to help them find out why their dream home is a dangerous nightmare, and if they can make it safe for their young family.

ABOUT THE GHOST BROTHERS

Dalen Spratt is addicted to history both in and outside of the paranormal. The entrepreneur and fashion designer is the ringleader of the team, with his finger on the pulse of the who, what, where, when and why of each case. He first encountered the paranormal when he was young child. After attending the funeral of a man lost to gun violence, he awoke to find the man standing over him…clear as day.  It’s the experience he never forgot, and one that bonded him to fraternity brother, business partner and BFF Juwan Mass.

Juwan Mass has a huge heart that can get him into the craziest of situations. He has a passion for helping people and is willing to jump into the fire to get answers. The former Eagle Scout is a natural born explorer.  With that said, he knows when to run when the stuff hits the fan. When he was 12, he turned his attention to the paranormal and ghost hunting.  Mass and Spratt bonded over their shared experience and desire to explore the unknown.

Marcus Harvey is the most spiritual member of the group, and the only father among the Brothers.  His ability to sympathize and relate to families sets him apart, whether it’s bonding with an upset spouse or winning over a scared child. He has an uncanny ability to provide peace and hope to frightened families; and his natural humor can always make clients crack a smile. When Marcus isn’t lending comfort to a beleaguered family, he’s lending an empathetic ear, mad clipper skills, and old school barbershop wisdom to his famous clients at his Atlanta barbershop.”

What do you think? Are you a fan of ghost hunting shows? Will you watch Ghost Brothers: Haunted Houseguests?

Invitation to come to Bobby Mackie Bar in WILDER KENTUCKY

These guys are great!

Please get rid of these clowns and cancel this show. The aren’t very serious and have no idea of what they’re doing. Also, why does anyone care what the Osborne’ s believe.

This shows is so entertaining and they are scared as we are but they are their. I would never make 1 night in these places. They are funny get to the heart and people suffering experts to get rid of what haunts them.

These guys are great! Much better personalities than some other shows that get renewed for years. They def deserve a 2nd season.

I’m a big big fan of the ghost brothers, love those guys SOOOOOOOOOOO much, keep them coming, XXXXXXOOOOOO

I just discovered this show and I love it. The guys seem like they genuinely care about the family and finding them answers. Also loved that fact that they are African American, its something different in the paranormal world and the humor just tops it off. Please bring this show back!

I agree with you 100% I would love to se them work with thhe team from Ghost Adventures. Ghost brothers is awesome

My whole family loves Ghost Brothers. Please bring the show back. These men are very good at their job. All are educated, professional good looking with outstanding personalities.
Sometimes they crack me up. I wish i had a reason for the Ghost Brothers to do a show here.
Please bring them back… We miss them dearly.

Yes I wud watch the show. I wudnt b asking abt its return if I wudnt watch it! It’s better than watching Zack run away from the stuff he’s supposedly looking for! Idiot! Please bring them back!

Bring them back. Take off ghost adventures. Zack is stupid and totally over acts. Ghost brothers are awesome and fun to watch. Whomever makes the decisions is not listening to the fans of this show.

I said the same thing abt Zack! OMG! Both of us can’t b wrong! Lol!,

I agree!! Bring the Ghost Brothers back!!!

I noticed no questions seem to be answered here. Oh well….

I love this program and want to know if it is still on or has been canceled. If its’ not coming on anymore I will stop watching your channel

I would like to know if this program will still be aired and when each episode is coming on. I love watching these guys.

Ghost brothers has to be my favorite paranormal show, it’s funny, they have a lot of heart and passion for families they help. I hope to see a lot more seasons

how can they be contacted about an investigation?