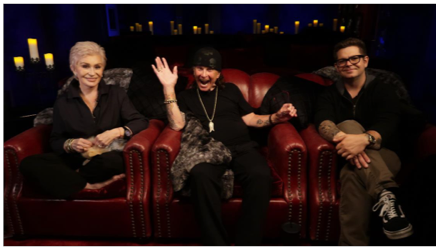 The Osbournes are returning to Travel Channel. Ozzie and Sharon will join their son Jack for a new paranormal series on the cable network, titled The Osbournes Want To Believe.

Travel Channel revealed the following about the new series in a press release:

“Jack Osbourne is determined to make his parents, Ozzy and Sharon, full-fledged paranormal believers. Dim the lights and settle in for fun, scares and unfiltered humor in Travel Channel’s new series, The Osbournes Want To Believe, premiering Sunday, August 2 at 10 p.m. ET/PT. They might be known as the first family of darkness, but when it comes to the paranormal, legendary rocker Ozzy Osbourne and his wife, “The Talk” co-host Sharon Osbourne, are borderline skeptics. Determined to turn them fully to the other side, Jack reunites with Ozzy and Sharon to share the craziest, most jaw-dropping videos of supernatural activity ever caught on camera. But the question still remains if the Prince and Princess of Darkness will see the light when it comes to the paranormal, or if they think it’s just another ride on the crazy train.

“My parents have always lived on the edge, even when it comes to believing in the supernatural,” said Jack. “I’m convinced they just haven’t seen enough evidence, so I’m making them watch the most undeniable footage caught on camera, including a few from my own personal experiences. My biggest challenge may be keeping their comments family friendly. It will be a classic Osbourne gathering!”

During each hour-long episode, Jack will reveal a series of mind-blowing paranormal clips from the great beyond for his parents, Ozzy and Sharon, to witness. From Bigfoot to UFOs, poltergeists, creepy dolls and unexplained apparitions, the couple will review – and critique – each caught-on-camera moment, a compilation of Jack’s favorite pieces of evidence. Not ones to shy away from honesty and humor, there’s no shortage of fun, antics and lively commentary in the Osbourne screening room.

In the series premiere, Jack Osbourne shares video footage of poltergeists, haunted dolls, UFOs and unidentifiable beasts that leaves Sharon and Ozzy – and their dogs – barking at the moon. Their outrageously funny reactions include Sharon’s love for “Harry & The Hendersons,” Ozzy’s historical digressions on Greeks, Romans and the berserkers and a copious amount of swearing – another day with the First Family of Darkness!”

What do you think? Will you watch this new series next month on Travel Channel? Do you enjoy watching the Osbourne family?

This is one of our favorite shows. Love the interaction of this family. Please don’t cancel this one!!

Yes, I watched it every Sunday but I noticed it is not on tonight. Was it cancelled? Please don’t cancel it, I’ve really enjoyed it. The actual paranormal footage is of course subjective but I enjoyed Ozzy, Sharon and Jack’s personalities.

Me too. And I think Sharon is so sweet with her pets. I love how they hold onto each other too I think the show is fun.

I watched the first episode and it was better than I thought. I’m actually a skeptic like jacks parents, but some of the footage is somewhat convincing but not all. Plus the interaction between the 3 is very entertaining. It’s a good show, I do like it

The lousiest show on this channel by far! The Osbourne’s are great at music but not acting. And all the clips are from other shows that have been played out on reruns for the past three years it’s disgusting.

I was not impressed with the show. #1 That their language (cursing) is disgusting. #2 I used to like Sharon on the talk show but her actions on this show have completely turned around my impression of her. #3 The videos of the paranormal activities have been seen dozens of times on other shows. #4 Ozzy is either wasted or suffering from all his years of drug abuse. I don’t believe I’ll be running in again. The first show was it for me.

Totally agree with you! Can’t change the channel fast enough.