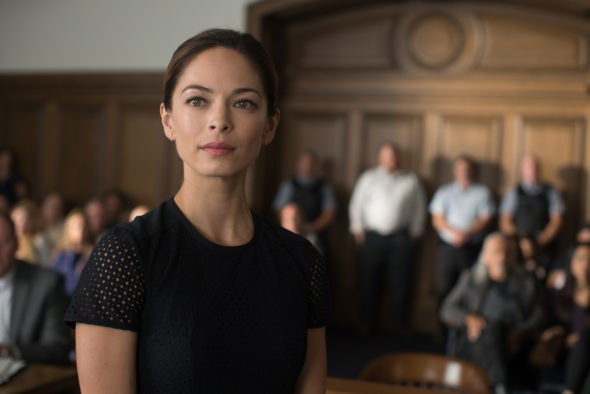 Photo: © 2018 Cause One Productions Inc. and Cause One Manitoba Inc.

Burden of Truth just wrapped its third season on The CW earlier this week, and the ending left fans wondering if the legal drama series will return for a fourth season.

Peter Mooney, one of the stars of the series, spoke about Burden of Truth’s renewal chances in an interview with TV Line:

“Well, I can’t say too much, but I feel good about it. The only thing that we’re really dealing with — and everyone’s dealing with right now — is the realities of shooting with the current pandemic. So I’m really, really hopeful that we’ll be able to go back for a Season 4, because that story did wrap up and I thought they wrapped it up so beautifully at the end of Season 3, but what I’m really interested in now is what does the new story look like? What does it look like with them as a family? And how do they continue on practicing as lawyers and moving forward together [with] a brand new little one on the mix? Right now, we’re just keeping our fingers crossed and hoping for some measure of a “return to normal” enough that we would be able to get back to filming. I think there’s more story there.”

Mooney also teased that showrunner Bradley Simpson is working on ideas for a fourth season if the drama series is renewed. But, what if the series is cancelled? Mooney notes:

I am satisfied. If it does end there, I felt like a story, a chapter of their life, has come to a close, the way we left it off, and then it would allow the next chapter to live on in the audience’s imagination, like what happens after. It’s kind of this dangling “What’s next?” that I don’t think is dissatisfying. I would like to do more just because I feel like there’s just more story there, but if it is the end, then I think it’s come to a beautiful and satisfying close.

What do you think? Are you a fan of the Burden of Truth TV series? Do you want to see a fourth season on The CW or, would you be okay if the show was cancelled?

I love this show and I want it to come back for another story.

I loved and enjoyed watching Burden of Truth. I’m waiting for season 2 and 3 to come out on DVD. I can watch it over and over.its become my favorite show along with the cast just love Kristin and Peter together. I love the storyline I am sad that not enough viewers look at this show like I do.

Like Evie before I truly enjoy Burden of Truth. I love the actress who plays the lead actress who became famous from The Smallville series. I still pray and hope that the show will renewal the show for another season.

PLEASE renew this show for another season. Great storylines and fantastic chemistry amoung the cast. FANTASTIC show. Thank you to the writers, cast and everyone behind the scenes– GREAT JOB!!

I fully support and recommend that the show continues with new seasons and more characters.