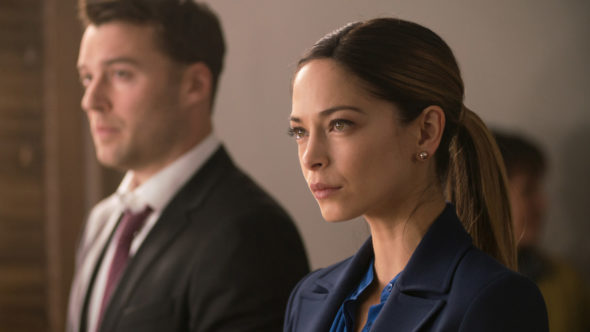 (Cause One Productions Inc. and Cause One Manitoba Inc. / The CW)

TV show description:
A legal serial from creator Brad Simpson, the Burden of Truth TV show originated on Canada’s CBC. The drama centers on attorney Joanna Hanley (Kreuk), who walked away from her partnership at a corporate law firm in order to figure out why a mysterious illness is afflicting high school girls from her hometown.

Back in Millwood, Manitoba, on the Canadian prairie, Joanna joins forces with her old high school foe, Billy Crawford (Mooney), who is a local attorney. Together, they’re determined to get justice for these students. Now they’re going to have to let old bygones be bygones, in order to determine the source of this illness.

Once upon a time, Joanna’s family left Millwood all of a sudden. Now that she is back in town, she realizes she has to investigate herself, her own family, and their long-held secret. Sometimes, Joanna’s cases change her clients’ lives. Will this one change hers? Stay tuned.

Series Finale:
Episode #34 — Standing by Peaceful Waters
With her legal career seemingly over, Joanna begins to chart a new path for the future. Billy gets some unexpected help in his pursuit of a new client. With Dee’s legal case at a dead end, Luna (Slade) is unsure where to turn.
First aired: September 17, 2021.

What do you think? Do you like the Burden of Truth TV series? Should this CW TV show have ended or been renewed for a fifth season?

As stated by another viewer…another fantastic show not renewed. I love and enjoyed all the actors they were all amazing. It was very touching on the scene where Joanna gave the gift to Billy professing their feelings for one another. I will miss seeing Joanna and Billy.