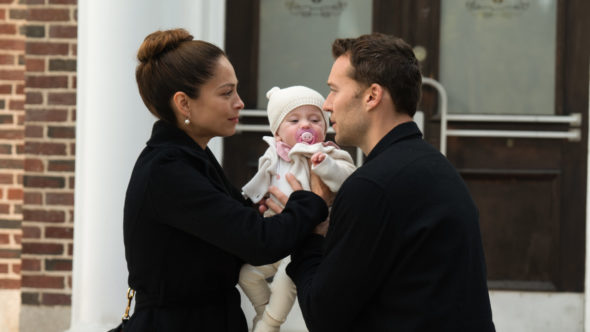 (Photo: Cause One Productions Inc. and Cause One Manitoba Inc.)

Is Joanna in over her head in the fourth season of the Burden of Truth TV show on The CW and CBC? As we all know, the Nielsen ratings typically play a big role in determining whether a TV show like Burden of Truth is cancelled or renewed for season five (in this case, we know season four is the end). Unfortunately, most of us do not live in Nielsen households. Because many viewers feel frustrated when their viewing habits and opinions aren’t considered, we invite you to rate all of the fourth season episodes of Burden of Truth here.

A legal drama on The CW in the United States, Burden of Truth stars Kristin Kreuk, Peter Mooney, Star Slade, Meegwun Fairbrother, Anwen O’Driscoll, Brynn Godenir, Paul Essiembre, and Skye Pelletier. The series centers on attorney Joanna Chang (Kreuk) and her partner in law and in life, Billy Crawford (Mooney). In season four, a mining company reopens a dormant mine outside Millwood and new parents Joanna and Billy step in to protect a local woman’s home from certain destruction. When the mine swiftly retaliates, Joanna is forced to confront a long-buried secret from her past and scramble to protect the future of her career and her family.

What do you think? Which season four episodes of the Burden of Truth TV series do you rate as wonderful, terrible, or somewhere between? Do you think that Burden of Truth should have been renewed for a fifth season on CBC and The CW? Don’t forget to vote, and share your thoughts, below.

I think that burden of truth is the best tv drama I have seen in a long time and one of the few that the cw got right. I hope you keep it going for many more seasons.

I to am disappointed that the show is ending.

I love Burden of Truth & would love to see it continue. Please renew it there are many fans out there that are like me & love the show!!!!!