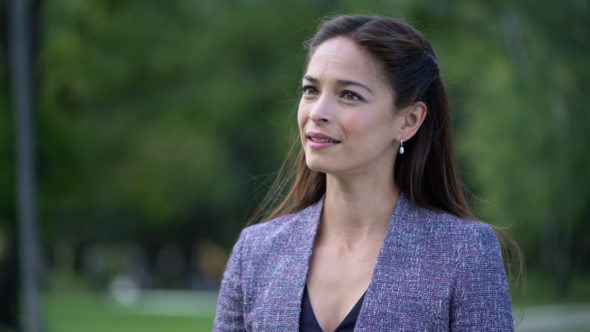 (Photo: Cause One Productions Inc. and Cause One Manitoba Inc.)

Is it “case closed” for this show? Has the Burden of Truth TV series been cancelled or renewed for a fifth season on CBC and The CW? The television vulture is watching all the latest cancellation and renewal news, so this page is the place to track the status of Burden of Truth, season five. Bookmark it, or subscribe for the latest updates. Remember, the television vulture is watching your shows. Are you?

Airing on The CW television network in the United States, Burden of Truth stars Kristin Kreuk, Peter Mooney, Star Slade, Meegwun Fairbrother, Anwen O’Driscoll, Brynn Godenir, Paul Essiembre, and Skye Pelletier. The series centers on attorney Joanna Chang (Kreuk) and her partner in law and in life, Billy Crawford (Mooney). In season four, a mining company reopens a dormant mine outside Millwood and new parents Joanna and Billy step in to protect a local woman’s home from certain destruction. When the mine swiftly retaliates, Joanna is forced to confront a long-buried secret from her past and scramble to protect the future of her career and her family.

The fourth season of Burden of Truth averaged a 0.05 rating in the 18-49 demographic and 339,000 viewers. Compared to season three, that’s down by 44% in the demo and down by 33% in viewership in the live+same day ratings (including DVR playback through 3:00 AM). While these numbers don’t include further delayed or streaming viewing, they are a very good indicator of how a show is performing, especially when compared to others on the same channel. There can be other economic factors involved in a show’s fate, but typically the higher-rated series are renewed and the lower-rated ones are cancelled. Find out how Burden of Truth stacks up against other CW TV shows.

We don’t have to wonder if CBC or The CW will cancel Burden of Truth since it’s already been announced that season four is the end. I’ll update this page with breaking developments. Subscribe for free alerts on Burden of Truth cancellation or renewal news.

What do you think? Do you think that the Burden of Truth TV show should be renewed for a fifth season on CBC and The CW?