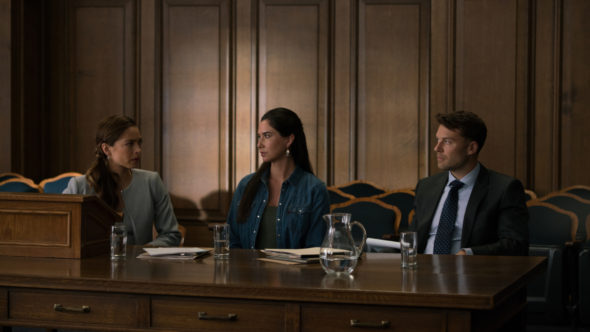 Will justice prevail in the third season of the Burden of Truth TV show on The CW? As we all know, the Nielsen ratings typically play a big role in determining whether a TV show like Burden of Truth is cancelled or renewed for season four. Unfortunately, most of us do not live in Nielsen households. Because many viewers feel frustration when their viewing habits and opinions aren’t considered, we invite you to rate all of the third season episodes of Burden of Truth here.  *Status update below.

A CBC and CW serialized investigative legal drama, Burden of Truth stars Kristin Kreuk, Peter Mooney, Star Slade, Meegwun Fairbrother, Anwen O’Driscoll, Sera-Lys McArthur, Dayle McLeod, and Paul Braunstein. The series centers on attorney Joanna Hanley (Kreuk), who walked away from her partnership at a corporate law firm in order to figure out why a mysterious illness was afflicting high school girls in her home town of Millwood, Manitoba. In season three, Joanna and Billy Crawford (Mooney) are working together in their new boutique law firm. They discover that living and litigating together has its challenges. On a cathartic trip back to Millwood for a class reunion, an old friend, Kodie (McArthur), turns Joanna’s life upside down when her children are removed by Millwood Family Services. Kodie believes she is the victim of a conspiracy and pleads with Joanna to help solve the case and bring her children home.

What do you think? Which season three episodes of the Burden of Truth TV series do you rate as wonderful, terrible, or somewhere between? Do you think that Burden of Truth should be cancelled or renewed for a fourth season on CBC and The CW? Don’t forget to vote, and share your thoughts, below.

*3/18/21 update: Burden of Truth has been renewed for a fourth and final season on The CW.

does anyone know where I can watch season 3?

I love the show and I am waiting for season 2 and 3 to purchase. I only have the season 1 that I can watch over and over. I like the chemistry between Kristen Kreuk and Peter Mooney. I hope therewill be a season 4.

I still hope that Burden of Truth will be a renewal for the 4th season by the two-channel. The show is a winner.