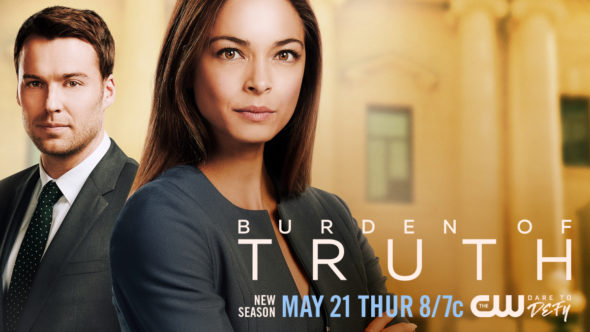 Originating on CBC in Canada, Burden of Truth has become a staple of The CW’s summer schedule in the United States. The series draws pretty low ratings but, because the network only licenses the series, it likely doesn’t cost them as much to air. Will Burden of Truth be cancelled or renewed for season four? Stay tuned. *Status update below.

A serialized investigative legal drama, Burden of Truth stars Kristin Kreuk, Peter Mooney, Star Slade, Meegwun Fairbrother, Anwen O’Driscoll, Sera-Lys McArthur, Dayle McLeod, and Paul Braunstein. The series centers on attorney Joanna Hanley (Kreuk), who walked away from her partnership at a corporate law firm in order to figure out why a mysterious illness was afflicting high school girls in her home town of Millwood, Manitoba. In season three, Joanna and Billy Crawford (Mooney) are working together in their new boutique law firm. They discover that living and litigating together has its challenges. On a cathartic trip back to Millwood for a class reunion, an old friend, Kodie (McArthur), turns Joanna’s life upside down when her children are removed by Millwood Family Services. Kodie believes she is the victim of a conspiracy and pleads with Joanna to help solve the case and bring her children home.

7/10 update: You can see the latest night’s ratings in context.

What do you think? Do you like the Burden of Truth TV series on The CW? Should it be cancelled or renewed for a fourth season?

*3/18/21 update: Burden of Truth has been renewed for a fourth and final season on The CW.

I hope someone will let us watch season 3 and 4 in Scotland. Season 1 and 2 were so good. I love the casting. Great characters and the actors fit right in there. I lived in North West Ontario and in Winnipeg for over 20 years. So maybe the issues in show make more sense to me, but the story is excellent and realistic anyway. It’s so great to watch Meegwun Fairbrother in the show as he grew up in Grassy Narrows near Kenora where I stayed most of the time. The scenery there is as breathtaking but the rampant… Read more »

I hope to see a season 4… I like the show

I really enjoy this show it shows issues that other shows don’t making the show interesting- I like the characters but several of them are off the show now I would like to see additional characters added with new story lines. The acting by the 2 key lawyers is hood and the chemistry is fun to watch, I don’t think they should have a baby so they can stay focused on law and cases

Great series please renew!!! I love this show and have seen all from season one. Please don’t cancel!

Please renew it. We enjoy watching it.

Please rene. I have watched from the first season and i really enjoy it.

Love this show been watching since it started, great cast and storylines, if you haven’t seen it you should