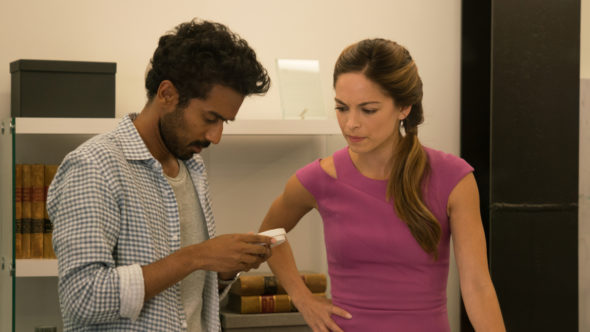 Is the second season of the Burden of Truth TV show on The CW a burden or a blessing? As we all know, the Nielsen ratings typically play a big role in determining whether a TV show like Burden of Truth is cancelled or renewed for season three. Unfortunately, most of us do not live in Nielsen households. Because many viewers feel frustration when their viewing habits and opinions aren’t considered, we’d like to offer you the chance to rate all of the season two of Burden of Truth episodes here.

A CW legal drama from creator Brad Simpson, Burden of Truth stars Kristin Kreuk, Peter Mooney, Star Slade, Meegwun Fairbrother, Anwen O’Driscoll, Sara Thompson, Michelle Nolden, and Varun Saranga. The series centers on attorney Joanna Hanley (Kreuk), who walked away from her partnership at a corporate law firm in order to figure out why a mysterious illness was afflicting high school girls in her home town of Millwood, Manitoba. By the end of season one, Joanna was estranged from her dad and changed her last name to Chang — her mother’s maiden name. In season two, she has joined a Winnipeg firm, where a new client involves her in a case full of political and cyber intrigue.

What do you think? Which season two episodes of the Burden of Truth TV series do you rate as wonderful, terrible, or somewhere between? Should The CW have renewed Burden of Truth for a third season or cancelled it instead? Don’t forget to vote, and share your thoughts, below.

I absolutely love Burden of Truth. I have not missed an episode. I record it as not to miss an episode. I have watched EVERY program that the female actress occurs in. She puts her all in everything. I was sad when you ended the show where her husband/man turned into a creature, “something beast” A GREAT SHOW!! A WONDERFUL AND TALENTED ACTRESS!!