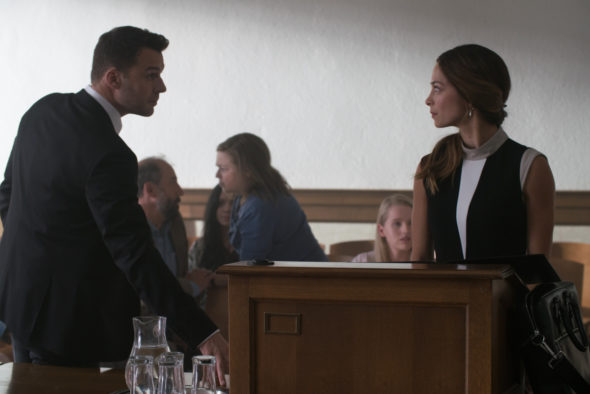 This ain’t no lie. CBC just announced season two of Burden of Truth will premiere in January.

The Canadian drama, which airs on The CW in the U.S., centers on attorney Joanna Hanley (Kristin Kreuk), who walked away from her partnership at a corporate law firm in order to figure out why a mysterious illness is afflicting high school girls from her hometown. The cast also includes Peter Mooney, Alex Carter, Star Slade, Benjamin Ayres, Nicola Correia-Damude, Meegwun Fairbrother, and Sara Thompson.

Season two of Burden of Truth debuts on CBC on January 9th.

What do you think? Have you seen Burden of Truth? Will you watch season two?

Love seaons one and two. I want season three now. I love the cast, the place, the storylines. including the *dad* being murdered. He was a cold-hearted prick.

Wife & I loved season 1; with it’s CW ratings, thought for sure it wouldn’t make season 2. Hopefully the CW will once again carry it next summer, as the trailers look amazing (which trailers usually can do). I was also impressed by Kristin Kreuk’s greatly improved acting since her Smallville days.

I am very happy i loved season one of Burden of truth it has wonderful actors and season 2 looks amazing.

Oh Yes!!! I am so, so, sooooo very happy Burden Of Truth has been renewed for a second season …. I watched season one and I am so hooked on this show. I pray for a season three!!!