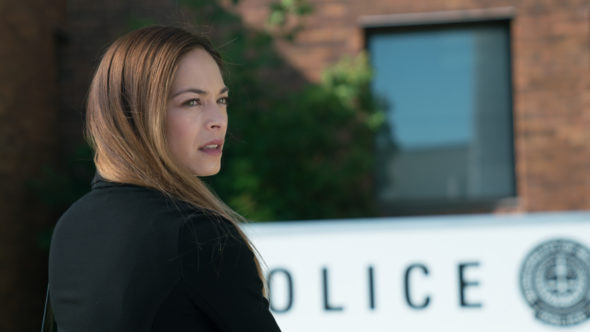 (© 2018 Cause One Productions Inc. and Cause One Manitoba Inc)

What’s next for Joanna? Is the Burden of Truth TV show cancelled or renewed for a third season on The CW? The television vulture is watching all the latest cancellation and renewal news, so this page is the place to track the status of Burden of Truth, season three. Bookmark it, or subscribe for the latest updates. Remember, the television vulture is watching your shows. Are you?

A CW legal drama from creator Brad Simpson, Burden of Truth stars Kristin Kreuk, Peter Mooney, Star Slade, Meegwun Fairbrother, Anwen O’Driscoll, Sara Thompson, Michelle Nolden, and Varun Saranga. The series centers on attorney Joanna Hanley (Kreuk), who walked away from her partnership at a corporate law firm in order to figure out why a mysterious illness was afflicting high school girls in her home town of Millwood, Manitoba. By the end of season one, Joanna was estranged from her dad and changed her last name to Chang — her mother’s maiden name. In season two, she has joined a Winnipeg firm, where a new client involves her in a case full of political and cyber intrigue.

The second season of Burden of Truth averaged a 0.08 rating in the 18-49 demographic and 478,000 viewers. Compared to the first season, that’s down by 42% and 34%, respectively. Learn how Burden of Truth stacks up against the other CW TV shows.

Since you don’t have to worry whether The CW will cancel or renew Burden of Truth for season three, just sit back and enjoy the drama. The series originates on CBC in Canada, so the price must be right for the network to pick up a third season before season two debuted. The early renewal was something of a surprise, since last year’s Nielsen ratings in the US were low, even for a CW summer series. Though it has already been renewed for a third season, I’ll still update this page as the season progresses, so subscribe for free Burden of Truth cancellation or renewal alerts.

What do you think? Are you glad that the Burden of Truth TV show has been renewed for a third season? How would you feel if The CW had cancelled this TV series, instead?

What a great show! Please don’t cancel!!! I’ve got my whole family watching it.

Loved the series. Please do not cancel.