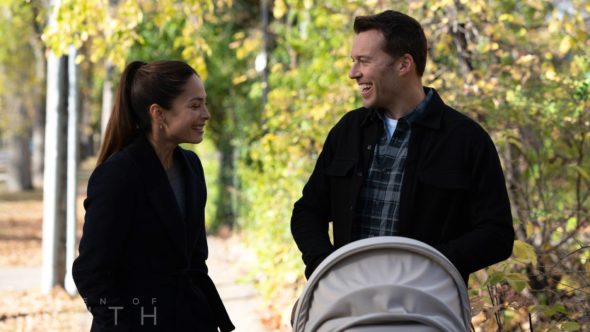 It’s soon going to be case closed for the Burden of Truth TV series. It’s been revealed that the fourth and final season will wrap up the show’s run. The eight episodes are expected to air on The CW this summer. There seems to be a disagreement over whether the show was cancelled or has ended on its own terms. Either way, we know there won’t be a fifth season.

Created by Brad Simpson, Burden of Truth debuted in 2018 and originates on CBC in Canada. The drama stars Kristin Kreuk, Peter Mooney, Star Slade, Meegwun Fairbrother, Anwen O’Driscoll, Sera-Lys McArthur, Dayle McLeod, and Paul Braunstein. The series centers on attorney Joanna Hanley (Kreuk), who walked away from her partnership at a corporate law firm in order to figure out why a mysterious illness was afflicting high school girls in her hometown of Millwood, Manitoba.

On The CW, the third season of Burden of Truth averaged a 0.09 rating in the 18-49 demographic and 505,000 viewers in the Live+same day ratings. Compared to season two, that’s up by 16% in the demo and up by 6% in viewership. The season finished airing in July 2020 and was one of the few series to experience ratings growth year-to-year.

The fourth season has been airing in Canada and the season (now series) finale airs tonight. News of the show coming to an end broke on the show’s Facebook page earlier today: “After four incredible seasons, we’re bringing our Burden of Truth story to its conclusion in tonight’s series finale. We are so proud of the stories we’ve been able to tell each season, especially those related to social justice. We’re also tremendously appreciative of the support we’ve received from our fans worldwide, and are particularly grateful to the communities in Winnipeg and Selkirk, Manitoba, for being so welcoming to our crew.”

Deadline reports that the show was cancelled but executive producers indicate that they knew ahead of time that season four would be the end.

“We’re incredibly proud of Burden of Truth and are honored that the show resonated with so many viewers worldwide,” executive producers Ilana Frank, ICF Films, Linda Pope, and Kyle Irving, Eagle Vision said in a statement. “When we began this season, we knew our story was coming to its natural end with a meaningful conclusion for Joanna, Billy, and the entire cast of characters. We’re thankful to the communities in Winnipeg and Selkirk, Manitoba, where we filmed our show, and our tremendous cast, helmed by Kristin Kreuk and Peter Mooney, for bringing ground-breaking stories to life. We also appreciate the steadfast support of our production partners at eOne, as well as our broadcasters CBC and The CW, on four tremendous seasons of Burden of Truth.”

What do you think? Do you enjoy the Burden of Truth TV series? Will you be watching season four when it airs on The CW? Are you sorry to hear that there won’t be a fifth season?

Love this show! It’s always the good or great shows that get cancelled. Very good ending though. I can see more potential with that show whereas Native Americans are concerned. Think about it CW.

Sorry to see it end.

I loved the show. If it’s over or cancelled it had a wonderful ending.