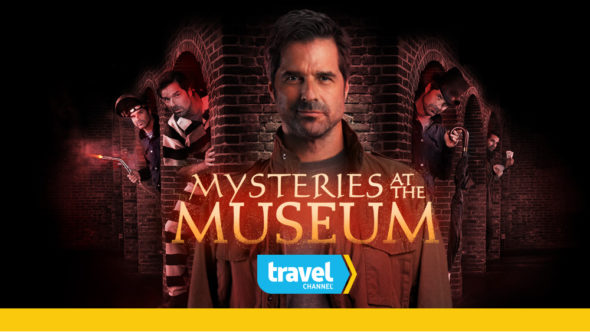 Mysteries at the Museum has planned a special 16-hour event for President’s Day next month. The event will include several episodes of the series.

Travel Channel revealed more about the special marathon event in a press release. Check that out below.

“The Thursday marathon will showcase two all-new episodes with surprising stories of past presidents. The episode at 9 p.m. ET/PT reveals the tale of Teddy Roosevelt’s high-stakes frontier showdown to bust up a notorious ring of outlaws. And in the 10 p.m. ET/PT episode, Wildman shares the intriguing story of Thomas Jefferson’s impressive $400,000 wine collection and how a worldwide counterfeit wine operation was exposed. On Sunday at 4 p.m. ET/PT, a Mysteries at the Museum special episode, “Lincoln Assassination: Extra Evidence,” explores an alternate theory about John Wilkes Booth, raising questions about the assassin’s death.

Here are three new episodes that will be featured in Travel Channel’s Presidents Day Marathon:

“Nuclear Nightmare, Teddy Roosevelt’s Badlands Bandits and the Movie Star and the Dead Man” – Premieres Thursday, February 15 at 9 p.m. ET/PT
Host Don Wildman investigates how a future president laid down the law in the Wild West, an accident that nearly caused a nuclear catastrophe and a shocking crime that rocked Hollywood.

“Jefferson’s Wine, First High Flyer and Stefania’s Thirteen” – Premieres Thursday, February 15 at 10 p.m. ET/PT
Host Don Wildman examines how a common dentist tool was the key to solving a bizarre mystery involving President Thomas Jefferson and bottles of rare wine, the helmet of a brave pilot who paved the way for space exploration and the story behind a young girl who stood up to the Nazis.

Are you a fan of this series? Will you check out this special event? Tell us what you think.