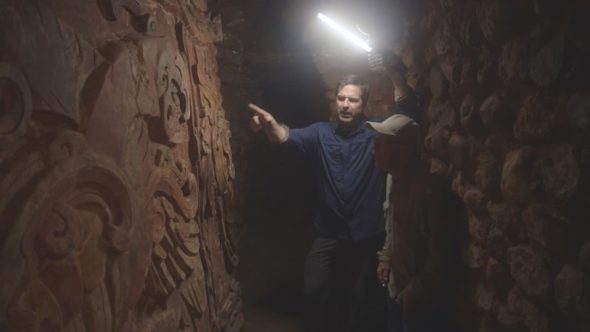 Buried Worlds with Don Wildman is coming to Travel Channel next month, and the series will take viewers into this world’s history – the dark side of it.

Travel Channel shared more details about the series in a press release. Check that out below.

“In Buried Worlds with Don Wildman, the iconic Travel Channel host takes his thirst for adventure into terrifying new territory to explore mankind’s darkest mysteries. In his newest series premiering on Travel Channel on Monday, June 8 at 9 p.m. ET/PT, Wildman is on a mission of a more cryptic sort, heading to remote regions of Peru, Haiti, Bulgaria and beyond – visiting the dark chasms and caverns of the paranormal and supernatural, tracking alleged lingering ghosts, devilish demons, vampires and witches burned at the stake. His global quest to explore the world’s most terrifying mysteries will consist of seven hour-long episodes and a two-hour special event finale airing on Monday, July 27 at 8 p.m. ET/PT.

As he joins in taboo rituals, comes face-to-face with paranormal entities and witnesses deadly practices, Wildman is seeking out the darkest legends in the world and experiencing them for himself. His adventures take him to the Virginia woods for a harrowing encounter with demonic spirits and to Poland and Germany to hunt for powerful occult objects hidden by the Nazis. Later in the season, Wildman’s journey takes him to the coast of Peru – the site of the world’s largest mass human sacrifice, never revealed before on TV – and comes face-to-face with an ancient tribal god.

“Buried Worlds is a quest that flips the switch on the paranormal and the supernatural, and sheds new light on the dark origin of legends and myths,” says Wildman. “And I investigate those legends and myths first-hand, traveling to their sources in some very surprising places.”

In the premiere episode, Wildman begins his adventure by traveling to Eastern Europe to discover the truth behind the haunting stories of vampires that still linger and torment rural Bulgarian towns. He joins a group of active vampire hunters as they investigate an abandoned village terrorized by vampires and uncover what looks to be the tomb of one of them. He continues his journey by diving into the history of these beings, not only in Bulgaria, but in Hungary as well. As Wildman discovers the dark past of vampires and witches, he is given the opportunity to contact the spirits of those who have passed, with the help of a modern-day witch. To bring his adventure full circle, he explores the dark truth of the infamous Count Dracula.”

Buried Worlds is a good series except for the Voodoo segment and the horror of listening to an animal being slaughtered for a sacrifice. This will give every sicko an idea you know…meaning its OK to murder an innocent animal and for viewers to witness this. This made me sick to my stomach. Shame on you !! Use your heads.