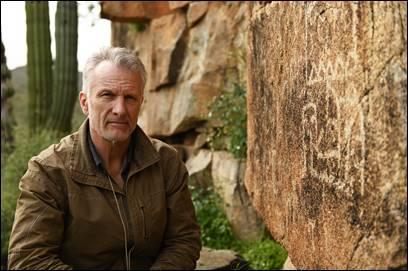 Where is America Unearthed headed to next? Travel Channel just announced the TV show will debut its fourth season in May.

The docuseries follows Scott Wolter as he explores “some of America’s deepest secrets, digging up mysteries that have been hidden until now. Using his background as a forensic geologist and teaming up with eyewitnesses and other experts in their respective fields, Wolter is determined to find new evidence and ultimately the proof that’s been buried in time suggesting history isn’t what we’ve been told.”

Season four of America Unearthed debuts on Travel Channel on May 28th at 10 p.m. ET/PT.

NEW YORK (April 30, 2019) – For decades, Scott Wolter has honed his skills in the sciences looking for historical answers within the natural world. Now, he continues his quest for the truth on Travel Channel in the new season of “America Unearthed,” premiering Tuesday, May 28 at 10 p.m. ET/PT. In the 10-episode one-hour series, Wolter explores some of America’s deepest secrets, digging up mysteries that have been hidden until now. Using his background as a forensic geologist and teaming up with eyewitnesses and other experts in their respective fields, Wolter is determined to find new evidence and ultimately the proof that’s been buried in time suggesting history isn’t what we’ve been told.

“Every day, science finds something new,” said Wolter. “We find new species, discover previously unknown societies and learn that the world isn’t quite what we thought. There has never been a better time to use science to solve the mysteries of history.”

In the premiere episode, “Vikings in the Desert,” premiering Tuesday, May 28 at 10 p.m. ET/PT, Wolter receives a call about alleged Viking artifacts found in the Arizona desert. Using state-of-the-art XRF (X-ray fluorescence) identification technology and insight from a Viking historian, Wolter starts his search in the southwestern desert. From there, new leads take him to California to excavate a supposed buried Viking ship that might have once sailed America’s vast inland sea and to Mexico to examine a petroglyph depicting what could be Viking travelers. The episode produces some unexpected results and opens the door to further expeditions into where the Vikings went and why.

Scott Wolter receives artifacts unearthed in central Mexico and is intrigued by the scenes they depict: Mesoamerican people worshipping what can only be described as aliens. After learning they’re over 9,000 years old, Wolter heads to Veracruz, Mexico, to investigate for himself. The hunt leads him into caves with strange inscriptions hinting that an unknown ancient society may have had contact with alien life.

Scott Wolter visits a mysterious cave in rural Pennsylvania that made headlines when it was first discovered in the 1980s for reportedly having cultural connections to pre-revolutionary America. Wolter’s investigation leads to the discovery of a strange artifact that may be the remnants of a fraternal society that used the cave for rituals. During his search, he interviews local historians and members of the community, discovering that throughout time, the cave may have been home to some of America’s most important historical events as well.

The identity of Jack the Ripper has captivated the world for over 100 years. What we know about the infamous killer is that he brutally murdered women with medical precision, wrote taunting letters to the authorities and was able to evade capture. However, shocking new evidence of a potential Freemasonic connection, as well as extensive medical research into a 19th century disease, proves pivotal, launching Scott Wolter on an epic hunt. Wolter wants to prove whether or not Jack the Ripper was actually a famous writer who is still beloved today.

Check out “America Unearthed” on TravelChannel.com for show extras including photos, videos and more. Follow @TravelChannel and #AmericaUnearthed on Facebook, Twitter and Instagram for more exclusive content and updates. Follow host Scott Wolter on Twitter @realScottWolter. And if you have a tip for Scott regarding an artifact or site you think he needs to see, go to TravelChannel.com to see how you can submit your evidence.

What do you think? Have you seen America Unearthed? Will you watch the new season?

America unearthed is amazing.
I do genealogy and I was told that my Uncle was a Free Mason. Where would I find out if he was a freemason and what order he would have been in?
Thank you

Yes I will watch. I love this show.