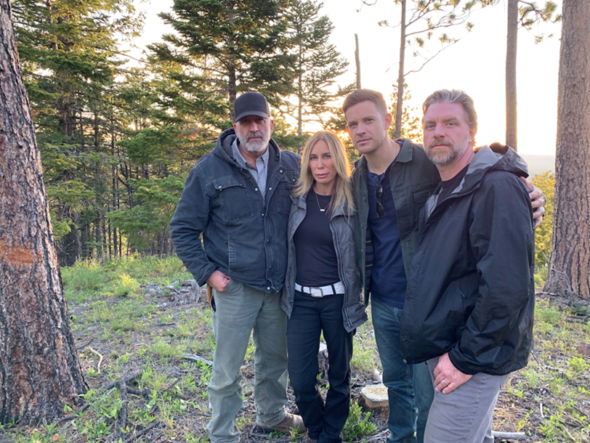 Get ready to join the hunt for bigfoot! Expedition Bigfoot is coming to the Travel Channel, and the new series is planning to provide new evidence to its viewers. The series premieres on December 4.

Travel Channel revealed more about the new series in a press release. Check that out below.

“Every year hundreds of eyewitnesses log their alleged encounters with the legendary creature Bigfoot. All told, there have been more than 10,000 reported modern-day sightings of Bigfoot in the continental United States, with more than one-third of them emanating from the Pacific Northwest. And while many have searched for the elusive beast, no one knows where or when this legendary cryptid will be seen next, nor have they put forth credible, indisputable evidence of the creature’s existence. Until now…

Old legend meets new modern-day technology as an elite team of skilled searchers are using an advanced data algorithm and groundbreaking science and tools to analyze five decades of Bigfoot sightings and to pinpoint when and where to encounter this elusive beast. With these results and gadgetry at their disposal, they now know the time and place to search for evidence of Bigfoot. Travel Channel’s new eight-part investigative-adventure series Expedition Bigfoot, premiering Wednesday, December 4 at 10 p.m. ET/PT, tracks the expert team throughout their harrowing experience and pioneering endeavor.

With a unique blend of expertise, the team – including Bryce Johnson (Expedition Operations); Dr. Mireya Mayor (Primatologist); Russell Acord (Ex-Military/Survivalist); Ronny LeBlanc (Bigfoot Researcher); and Ryan “RPG” Golembeske (Bigfoot Investigator) – may finally take one of the world’s greatest mysteries out of the pages of legend and lore and into reality. Throughout their three-week sojourn to an undisclosed, remote location in a 90,000-acre swath of land in central Oregon, they use the latest advanced technologies to narrow their search within the target zone. As the investigation intensifies, evidence that Bigfoot is in the area begins to pile up. Possible nesting sites, footprints and vocalizations lead the team to a hot spot where inexplicable events occur and one of the greatest pieces of video evidence in Bigfoot history is recorded.

“Travel Channel has assembled the very best team of experts in Bigfoot lore and science to give us proof of the creature’s existence once and for all,” said Matthew Butler, general manager, Travel Channel. “The journey is formidable, and the jeopardy is real. Skeptics and believers alike will both agree the trek this team makes is something they have never seen before.”

What do you think? Do you plan to check out Expedition Bigfoot on the Travel Channel next month?

WHY WHY WHY did you have to put exp. bigfoot on discovery plus after two new shows this year? I already pay to much for DISH. You ruined my sunday nights. only hoping I can watch reruns some day.But we can still watch FAKE mountain monsters!

I am so so disappointed that you sent all of the bigfoot shows to discovery plus, after us loyal viewers made it popular!! What a slap in our faces!! Bring our show back to tv. Not everyone can or wants to stream and squint to see a computer screen. ugh

Yes please give us more seasons of this. There are not enough Bigfoot shows on
TV. There needs to be a real serious expedition to find Bigfoot once and for all. Get
the Oak Island guy in on this.

I ordered a tiny GPS I’m going to put inside a cornish Hen and hang it from a tree by string. When BF eats it I’ll be able to track him down using google maps
Tim Black

I was praying that you would have another season of Expedition Bigfoot. The first season was outstanding and I was glued to the television on every episode. Thumbs up to the Travel Channel for renewing another season.

Is the show going to have a second season? And when would it be aired on TV?