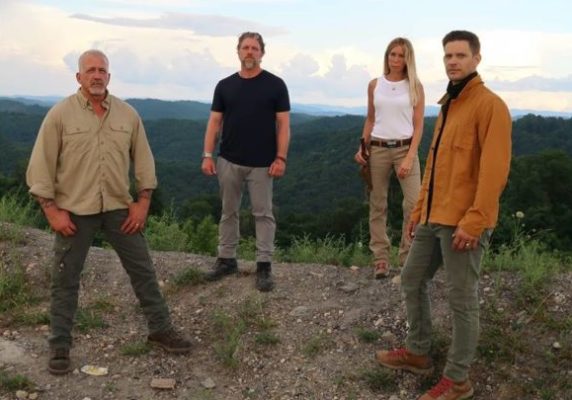 Expedition Bigfoot is coming back for a second season. Travel Channel has renewed the series, and it will premiere with new episodes in January. Russell Acord, Ronny LeBlanc, Dr. Mireya Mayor, and Bryce Johnson are the team searching for the mysterious bigfoot. During the first season of the series, the team moved one step closer to finding the legendary creature.

“2020 may just be the year the world turned upside down. But for Travel Channel’s Expedition Bigfoot team, it was a rare moment in time when three very important sets of data converged – and put them one step closer to capturing evidence of the legendary, elusive creature. The “Expedition Bigfoot” team have reassembled to review their findings from last season and reevaluate the algorithm to respond to the uptick in Bigfoot sightings just this year, in the new one-hour special premiering on Sunday, January 3 at 8 p.m. ET/PT. Then the team hit the ground running for an exciting Season Two, premiering at 9 p.m. ET/PT.

The advanced data algorithm has revealed a 75,000-acre swatch of Appalachian forest in southeast Kentucky, where the mathematical odds of a Bigfoot encounter are greatly increased during a specific 21-day window. With limited time and opportunity, the team – including Bryce Johnson (expedition operations); Dr. Mireya Mayor (primatologist); Russell Acord (ex-military/survivalist); Ronny LeBlanc (Bigfoot researcher) – have honed in on promising new targets. And this year, their analysis has uncovered something new – possible Bigfoot migratory patterns that may reveal precisely where the legendary beasts will be and when they will be there.

Throughout their two-month journey, the team use the latest in advanced technologies to narrow their search within the designated target zones. As the investigation intensifies, evidence that Bigfoot are in the area begins to pile up – vocalizations, unexplained structures, DNA samples and massive 16-inch footprints that no man could have left behind. This scientific expedition may finally take one of the world’s greatest mysteries out of the pages of legend and lore and into reality. The new season is comprised of 12 new one-hour episodes and two one-hour specials.

“Using science, technology and true grit, the team is genuinely invested in solving this iconic mystery and it’s a wild and exciting ride – closing in on the legendary monster that is also the world champion of being socially distant,” said Matthew Butler, general manager, Travel Channel.”

What do you think? Are you a fan of Expedition Bigfoot? Will you watch season two on Travel Channel?

STUPID show! WHY do you keep doing this with dumb Bigfoot? Where are all the paranormal shows going? These Bigfoot shows are boring as hell! STOP IT!

The best bigfoot show on tv. Not a bunch of fake hunters talking and hollering in the woods like idiot’s. The people involved are professional and believable. I believe the possibility of bigfoot and truly enjoy the show. Please return to travel channel because I will not buy more expensive channels.

Bring back expectations bigfoot on the travel channel. Good show, because everyone needs to know what we have out there. To many of us have seen bigfoot and know he’s real.

Suppose to be knowledgeable. Simple and common- hello? Bucks, bull elks, does or calf’s will drop down in thick brush and crawl away, with hardly any sound at all. Or the most likely become still hardly even breathing.

why only 2 new episoeds in Kentucky then re-runs from last season and the same thing is go’n own with Mountian Monsters….what’s the deal

Am in agreement with other people on this forum, we should not have to buy Discovery+, we’re on a fixed income, Please put back episodes on Travel!!!
V.B.

I’m afraid I also have to agree. I already pay for cable, and sadly, with all the income loss, really can’t afford extra costs. It’s like a dirty trick, taking advantage of people stuck at home, on limited budgets.

I really like the show ,I like to see new episodes but keep showing Repeats when the newest episode will show . They should get more people on their team cover more Territory and utilize the drones with Cameras and speakers

I love the show. It is how a search should happen. I am a scientist myself. Sometimes I wish all the tools could be used, but they do a great job.

I too am very disappointed in the Travel Channel and the producers of Expedition Bigfoot. I loved that show and looked forward to every episode! I was so excited it renewed for season two until they dangled three episodes to us and then stopped on episode 3when the team was hearing several calls around them. At that point the show moved to Discovery Plus. Had they made the change st the beginning or end of a season it would have been easier to understand but to stop in the middle of the season was in extremely poor taste! I already… Read more »

I agree completely with the above comment. With all the covid unemployment , it just leaves a bad taste for cable channels are moving new show to Discovery + luring into the shows them they are gone we loyal views left hanging, with reruns see n 150 times. A lot of us can not afford the extra charges of we live rural with poor internet any way! I love the show looked forward to esp after the first couple episodes. Very disappointed, shame on you is all I am allowed to say.

Thought you should know

I sincerely hope you continue this series.
on the Travel Channel.

I love this program. This team is not out to kill bigfoot but to scientifically prove it’s existence. I know these beings exist. In the area where my mom and dad use to live the county police dpt. had several cast moldings of foot prints found in the area. My dad also found prints out in the woods near there house.
It is great to watch how each member works in their own way but also merge together as a team.