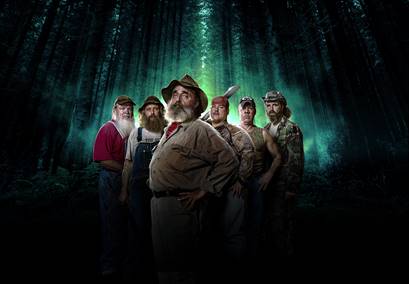 Mountain Monsters is making a big move. It was just announced the TV show’s fourth season will debut in August on Travel Channel.

The docuseries centers on Appalachian Investigators of Mysterious Sightings, a “rip-roarin’ group of self-proclaimed ‘hillbilly hunters’ [who trek] through the depths of Appalachia’s mountain forests, searching for creatures of mythical origins, determined to track down proof these monsters still roam this region today.”

NEW YORK, NY (July 15, 2019) – Deep in the Appalachian Mountains, creatures both legendary and terrifying lurk among the shadows, evading capture at every turn. Season Four of the cult-classic series “Mountain Monsters,” moves to its new home on Travel Channel with a special two-hour premiere on Wednesday, August 21 at 9 p.m. ET/PT,reunitingthe fearless team of hard-core trappers to confirm the sightings of these fabled monsters. Calling themselves the AIMS team – the Appalachian Investigators of Mysterious Sightings – this rip-roarin’ group of self-proclaimed “hillbilly hunters” treks through the depths of Appalachia’s mountain forests, searching for creatures of mythical origins, determined to track down proof these monsters still roam this region today.

In the two-hour season premiere, the series picks up right where it left off – with team members Trapper, Buck, Huckleberry, Jeff, Willy and Wild Bill entangled in the backwoods of the Dark Forest. Later in the episode, the clock fast-forwards 18 months to when the group reunites, visibly shaken, but still determined to finish their initial quest.

“After leaving Season Three with such an intense cliffhanger, we knew we had to broadcast this season on a larger platform, bringing this incredibly popular show from Destination America to a new home at Travel Channel for our AIMS-obsessed fans,” says Matthew Butler, general manager of Travel Channel and Destination America. “Viewers are really invested in the AIMS team and its investigations, and we are elated to finally share what truly happened in the Dark Forest, while catapulting the squad into a whole new set of intense hunts, thrilling twists and hillbilly hilarity.”

The additional nine one-hour episodes of the season, airing on Wednesdays at 9 p.m. ET/PT, run full-steam ahead towards a new raucous adventure, with the AIMS team chasing seven monsters deeply rooted in folklore and somehow connected to the greatest creature of all: Spearfinger. With trapping Spearfinger as its final goal, the team must first look for the Waya Woman, the Cherokee Devil, the Raven Mocker, the Silver Giant, the Cherokee Death Cat and the Coyote King. Each monster is more treacherous than the last, and the team members must rely on their trust in one another, expert knowledge of the terrain and the bond of their brotherhood to sustain the hunt. The grueling work, terrifying encounters and daunting setbacks that come with hunting monsters only inspires the team members to push forward knowing that if they stay together as a unit, they are sure to solve the mysteries of the mountains.

Travel Channel will encore the previous Season Three finale as a precursor to the new episodes. The new season will run from August 21 through September 25, and the final four hours will pick back up and premiere beginning on October 30.

Picking up at the exact moment last season left off, the AIMS members are on a race to flee the Dark Forest before it tears the team apart. After a heart-wrenching health update from Team Leader Trapper, the team members set out to finally get the answers eluding them. How did that skull get up Jeff’s nose? What secrets does the Dark Forest really hold? They realize they must head back and find an old barn that holds the key to all of the answers they so desperately need. But is the team finally ready for the truth?

After a shocking revelation in the Dark Forest, the AIMS Team members are back doing what they do best, hunting monsters, as they begin an all-new epic adventure to get to the bottom of a brand-new mystery. The first stop is Jackson County, West Virginia, as the team heads after a monstrous wolf creature known as the Waya Woman. This 7-foot-tall being roams the cornfields of Jackson County and the team must build a trap strong enough to contain this beast and also be placed deep in the cornfields. Dead chickens, creepy altars and Wild Bill’s high school nickname are all on full display in this incredible episode.

“THE SECRET OF THE BLUE HOUSE” – Premieres September 4 at 9 p.m. ET/PT

After making several shocking discoveries in the cornfields of Jackson County, the AIMS team continues its search for the truth surrounding the legendary Waya Woman. At the heart of this mystery sits an old, abandoned blue house with a terrifying history. Not only have two families been killed here under suspicious circumstances, but their deaths are believed to be tied to the Waya Woman herself. The team finds out that only way to get answers is to simultaneously try out two rituals, which bring about face-to-face encounters they could have never prepared for.

The AIMS team sets off after a massive bear creature known as the Silver Giant. This behemoth is said to stand on its hind legs at over 10-feet-tall and has a silver streak running down its back. Due to his love of anything bear related, Wild Bill decides to step up his game and mimic Jeff as the team researcher. Obsessed with science and “scat samples,” Wild Bill is in full researcher mode as the team creates its largest trap to date. But the team members soon learn the Silver Giant may not be the only mysterious creature in the hills of Boone County.”

What do you think? Have you seen Mountain Monsters? Will you watch the new season?

Mountain Monsters is one of the most entertaining shows on TRVL. It is full action and goofy humor, completely beats the “What was that!” or “Did you see/hear that!” while standing in the dark of other shows. And there are no prima donnas feeding their own egos. Willie is a genius! I know Trapper recently died, very sad. I waited a couple years for Season 4. Please don’t make me wait that long for Season 5.

My grandson , brother, husband and me love this show. Please keep it on the air

My husband and I are huge fans if the show. We used to watch them on Discovery but could no longer get the channel when we cancelled our satilite and went back to cable. We was thrilled when we learned the Travel Channel had picked them up. We just can’t get enough of watching the AIMS team. We are looking forward to more episodes. Can’t wait for more adventures. Thank you Travel Channel for picking them up.

I love this show but I dont like that it seems more scripted now. Let them get back to chasing bigfoot like in the beginning and forget this dark forest bs. The writers are ruining this for me.

Love this show trapper will be missed but they will do fine without him. I would like to see more shows going after big foot . Glad it’s back

I love this show so happy they are coming back

Great show, As staged as pro wrestling and every other “reality” show but fun to watch. I get a kick out of how they take the smallest penlight flashlights into the woods.

Great show…..as staged as pro wrestling and every other “reality” show but fun to watch. I get a kick out of how they take the smallest pen light flashlights with them into the woods.

I will DEFINITELY be watching. I LOVE this show.

This show makes me laugh, I can only take it for an episode or two though, and Wild Bill is my favorite. I would like for them to add Turtleman to the crew he would be perfect.