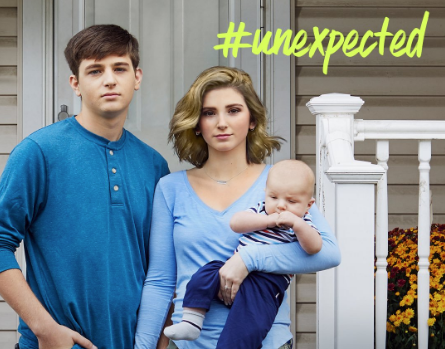 The docuseries “takes a raw look at several teenage couples’ journeys through parenthood, and the responsibilities that fall upon each family as they struggle to raise multiple generations, oftentimes under the same roof.”

Season three of Unexpected debuts on TLC on August 4th at 10 p.m. ET/PT.

(New York, NY) – TLC’s riveting series UNEXPECTED returns for a third season beginning Sunday, August 4 at 10pm ET/PT. The eye-opening show takes a raw look at several teenage couples’ journeys through parenthood, and the responsibilities that fall upon each family as they struggle to raise multiple generations, oftentimes under the same roof. Not every family member sees eye to eye with the teens when it comes to child-rearing, and tension is inevitable when roles become blurred.

Returning this season are McKayla (18) and Caelan (20) who are expecting their second child, and Chloe (17) and Max (19), who are adjusting to their new life as first-time parents while simultaneously trying to maintain their relationship, despite Chloe’s parents’ disapproval. Viewers will also be introduced to four new couples who are trying to navigate the ups and downs of teenage pregnancy and parenthood, including Hailey (16) and Matthew (16), Rilah (16) and Anthony (18), and Tyra (18) and Alex (18), in addition to Tyra’s younger sister Tiarra (16) who recently birthed her first child with her boyfriend Dee (18).

In the season three premiere, viewers find McKayla and Caelan at a crossroads in their relationship, and McKayla is ready to self-induce labor on her second child. Meanwhile, Chloe is essentially parenting Ava as a single mom while also attempting to maintain distance between her parents and her boyfriend Max, who may be facing jail time. Also, just days after her younger sister Tiarra gave birth to a baby girl, Tyra finds out that she is five months pregnant, and she is concerned about the health of her baby. And, much to Hailey’s dismay, Matthew has yet to introduce her to his sister, who has serious doubts about Matthew’s readiness to become a father.

As these teens transition from proms, to baby showers, to delivery rooms, their families stick by their side every step of the way, while helping to guide them from heartbreak and helplessness, to hope.

TLC is partnering with Power to Decide, the campaign to prevent unplanned pregnancy, to help viewers use UNEXPECTED as a way to spark meaningful conversations about unplanned pregnancies. There have been historic declines in teen pregnancy and meaningful declines in unplanned pregnancy over the past two decades, according to Power to Decide. However, progress doesn’t mean victory: nearly one in four girls will get pregnant by age 20, and children of teen moms are more likely to become teen parents themselves. Based on themes covered in the show, Power to Decide is creating discussion-starters, information and tips for young people and their parents, mentors and allies to jump-start open conversations and ensure all young people have the power to decide if, when and under what circumstances to get pregnant and have a child. These resources will be available for viewers at TLCme.com/FamilyResources.

UNEXPECTED: BABY BUMPS is returning for season three. The original digital series will be available on TLC GO July 28. This five-episode digital series catches up with the returning moms and introduces three new expectant teens and their families.

Join the conversation on social media by using the hashtag #Unexpected, ‘Like’ the show on Facebook and watch full episodes by downloading the TLC Go app or visiting: TLC.com/Unexpected.

UNEXPECTED is produced by Eastern TV for TLC.”

What do you think? Have you seen Unexpected? Will you watch the new season?

This girl needs to grow up and and get a job quite reproducing and take responsibility. You had a good man

Please take McKayla off the show. She is going to keep popping out babies and blaming everyone for her …….life. Her grandparent are horrible and baby her into thinking her boyfriend is a bum …because God forbid, he has a job!!!!! And thus he can’t be at her beck and call all the time. And her mom!!,, Good lord she wouldn’t even be around if not for the cameras. This is the most disfuntional mess I have ever seen. As long as she has a platform as in this show, she will keep popping out a baby each year just… Read more »

AMEN… calyn is a good boy compared to most Mcayla will be crying when he gets a girlfriend, she’s a idiot ,and I’m glad they are going to court for those kids.

I agree totally with everything you have said.

Please take this show off TV. It’s so bad for everyone watching. It really just shows how these parents allow their kids to have sex. Not educational for anyone. Nothing but who can argue the most. And everyone looks stupid. Especially you, the people who make this kind of garbage.

When will season 3 of unexpected be on hulu?