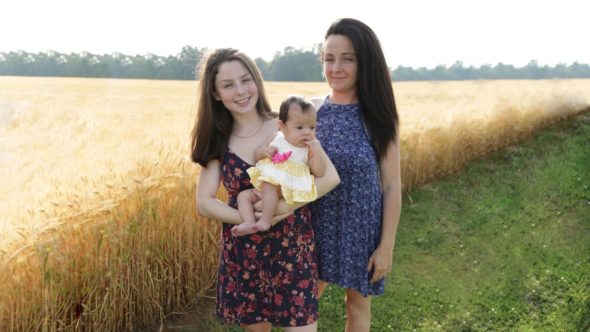 A new season of Unexpected is coming to TLC in December, just in time for Christmas. The docu-series follows families who need to deal with the unexpected news of teen pregnancy in their lives. Two couples are returning from previous seasons and will be joined by three new couples.

TLC revealed more about the return of Unexpected in a press release.

“TLC’s UNEXPECTED returns with an eye-opening look at teenage pregnancy and parenthood on Sunday, December 20 at 10pm ET/PT. The new episodes explore the life-altering journeys that teens and their families embark upon as they prepare for a baby, from the struggle to raise multiple generations under one roof to the inevitable tensions that arise when family members disagree on parenting decisions. Viewers can meet the young expectant moms and their families before UNEXPECTED premieres in the digital mid-form series BABY BUMPS, which premieres on TLC Go on December 13.

In the season premiere, Myrka is trying to fix her relationship with her mother who kicked her out of the house upon learning about the pregnancy, forcing Myrka to move in with Ethan and his family. Reanna recently decided to move over an hour away from Taron following their breakup so she could live with her mom. The former couple is no longer on speaking terms, and Reanna’s mother is adamant that they need to restore civility for the sake of their child whose arrival is coming soon. Jenna’s pregnancy led her to drop out of her strict Catholic high school and enroll in an online school. She and Aden met in sixth grade and now await the birth of their baby, supported by Jenna’s dad, who finds it hard to say “no” to Jenna whenever she asks for something, including a car for her birthday. Tyra has recently enrolled in college, and if she graduates, she’ll be the first of five generations of teen moms in her family to do so. With the school located several hours away from Alex and their daughter, it’s causing a strain on their relationship. Later in the season, viewers will be reintroduced to Lily, who is pregnant with her second child, and meet her boyfriend Lawrence, who is hoping to take their relationship to the next level.

For the fourth consecutive season, TLC is partnering with Power to Decide, the campaign to prevent unplanned pregnancy, to help viewers use UNEXPECTED as a way to spark meaningful conversations about unplanned pregnancy. There have been historic declines in teen pregnancy and meaningful declines in unplanned pregnancy over the past two decades, according to Power to Decide. However, progress doesn’t mean victory: large disparities still exist for youth of color, and for those living in poverty and rural areas. In fact, nearly one in four girls will get pregnant by age 20, and children of teen moms are more likely to become teen parents themselves. Based on themes that come up in the show, Power to Decide is creating custom discussion-starters, information, and tips for young people and their parents, mentors and allies to jump-start open conversations and ensure that all young people have the power to decide if, when and under what circumstances to get pregnant and have a child. These resources will help viewers get informed and think about how they might handle similar situations in their own lives.”

What do you think? Have you watched Unexpected on TLC? Will you watch the fourth season premiere in December?

What I’m not a fan of is Teen Mom and Unexpected pretending that these shows somehow slow the rate of teen pregnancies. If anything, these shows encourage teen pregnancy. On Teen Mom, the only thing teens see is the million dollar houses they live in and the entitled attitudes they have. They don’t see how truly hard it is to raise a baby as a teen in the real world without the extra glamour and money that reality TV brings in. I have seen teen girls on Twitter tweeting to Amber and Jenelle, who both have arrests and drug charges… Read more »

Is the season 4 going to be available on hulu?