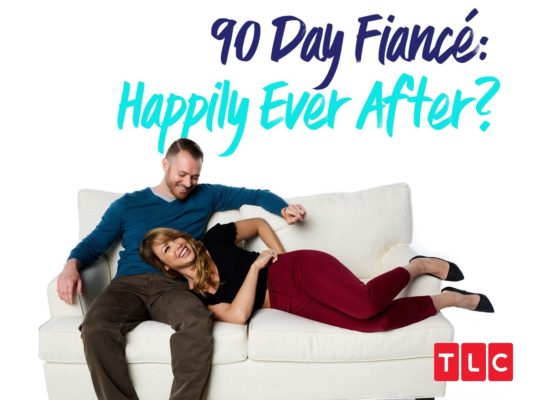 The new season of the reality series will feature six new couples after they say “I Do.” The couples include Ashley and Jay, Colt and Larissa, Russ and Paola, Chantel and Pedro, Nicole and Azan, Elizabeth and Andrei.

Season four of 90 Day Fiancé: Happily Ever After premieres on TLC on April 28th at 8 p.m. ET/PT.

(Los Angeles, CA) – Six fan-favorite couples are back and fighting to discover if the love they found once upon a time will ever get them to “happily ever after.” TLC’s 90 DAY FIANCÉ: HAPPILY EVER AFTER? kicks off its fourth season with 12 two-hour episodes on Sunday, April 28 at 8PM ET/PT, ending with a drama-filled couples tell-all. Viewers have followed these couples’ victories, trials and tribulations on Sunday nights’ #1 cable program, and now, the newlyweds are back with even bigger challenges. Saying “I do” was just the beginning; many painful realities and unexpected obstacles await as they navigate cultural differences, pregnancies, in-laws, scandals and more.

For the first several weeks of the season, viewers will get a second helping of 90 DAY FIANCÉ: HAPPILY EVER AFTER? on a brand-new night! Starting Monday, April 29, special episodes “90 Day Fiancé: Pillow Talk” feature individuals from past seasons giving their own juicy take on the previous night’s events, from the comfort of their own home.

The couples followed throughout the new season of 90 DAY FIANCE: HAPPILY EVER AFTER? include:

After falling for each other on her trip to Jamaica, Jay ditched his playboy lifestyle to marry Ashley… or has he? Ashley’s trust in Jay is put to the test when she discovers that her much younger husband has been entertaining multiple women on a dating app.

Tensions have been high between Colt and Larissa, ever since she was arrested only two days before their wedding. As the ticking clock counts down to Larissa’s trial date, Colt hopes to make peace and put the past behind them. But if Larissa is found guilty, she could be deported.

From beginning a modeling career, to getting pregnant and having a healthy baby boy earlier this year, Paola and Russ have been living their Miami lives to the fullest. Now that some time has passed since Paola left Oklahoma City after feeling rejected by Russ’ family, they decide that it might be time to finally attempt to heal the divide between Paola and her in-laws.

A physical confrontation between Pedro and Chantel’s family last season left their marriage in shambles. When Chantel blames Pedro for the fight, he returns to the Dominican Republic. Will Chantel’s decision to go after her husband be enough to save their marriage, or will she uncover more chaos?

Elizabeth’s father has helped set the couple up with rent-free housing while Andrei works on securing a steady job. With a baby on the way, Andrei has little choice but to accept his in-laws offer, although he fears that this is Elizabeth’s family’s latest attempt to hold him in their debt. When the bills start piling up and Elizabeth’s family refuses to back off, Andrei inches closer and closer to his boiling point.

After postponing their wedding to open a business instead, Nicole’s tourist Visa expired, and she had no choice but to return to Florida. Now, Nicole is sleeping on a family member’s couch while continuing to send Azan money. With her plans to reunite with him on a Caribbean island soon, will Nicole’s family finally be able to convince her that Azan may simply be exploiting her before it is too late?

And for the fans that still can’t get enough, TLC’s digital series 90 DAY FIANCÉ: WHAT NOW? premieres for its third season exclusively on the TLC GO app. Following up with several couples from seasons past, the digital episodes will be available to stream on Monday, April 15.

Join the conversation on social media by using the hashtag #90DayFiance and ‘Like’ the show on Facebook. Catch up on full episodes of 90 Day Fiancé: Happily Ever After on TLC.com or by downloading the TLC GO app. Don’t miss a special sneak peek at the premiere episode on TLC GO starting Sunday, April 21.

90 DAY FIANCÉ: HAPPILY EVER AFTER? is produced by Sharp Entertainment for TLC.”

What do you think? Do you watch 90 Day Fiancé: Happily Ever After? Will you tune in for the new season?

Luv this show kept me on the edge of my bed. I couldn’t wait to see the next episode! N what dumb stuff the couple’s would turn around n get in trouble doing , yelling, get arrested , n falling for the wrong person. To marry. each other very entertaining for sure. Good show thanks