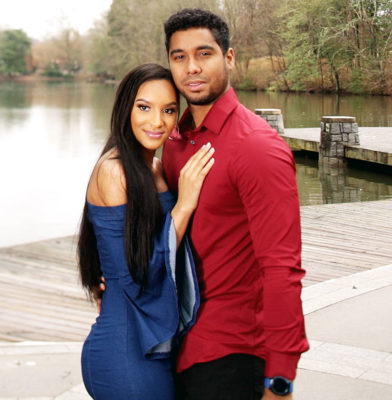 Are you a big fan of 90 Day Fiancé? TLC just announced the premiere dates for their two new spinoff TV shows, 90 Day Fiancé: Before the 90 Days and The Family Chantel.

The Family Chantel (July 22nd at 10 p.m. ET/PT) “will pick up exactly where HAPPILY EVER AFTER? leaves off, as Pedro and Chantel continue to work through their issues and attempt to create a happy life together in Atlanta.” Meanwhile, 90 Day Fiancé: Before the 90 Days (August 4th at 8 p.m. ET/PT) “follows seven Americans who have fallen in love online. Now they’re traveling overseas in hopes of a marriage proposal with someone they’ve never met in person.”

(Los Angeles, CA) – TLC’s “Summer of Love” continues to turn up the heat with its red-hot 90 Day Fiancé franchise. First, fans will get an extra special dose of Pedro and Chantel in the first ever spinoff of the 90 Day franchise following an individual couple, THE FAMILY CHANTEL, premiering Monday, July 22 at 10pm ET/PT. Then, on Sunday, August 4 at 8pm ET/PT, BEFORE THE 90 DAYS, the series that broke 90 Day ratings records, returns for season three with international couples that are sure to captivate fans like never before.

Until then, fans can get their 90 Day fill with currently airing series HAPPILY EVER AFTER? and PILLOW TALK on Sunday nights and THE OTHER WAY on Monday nights at 9pm ET/PT.

With the franchise’s expansion to Monday nights, viewers will pick up exactly where HAPPILY EVER AFTER? leaves off, as Pedro and Chantel continue to work through their issues and attempt to create a happy life together in Atlanta. But it won’t be so easy–after Chantel reveals all of the explosive information she learned on her trip to the Dominican Republic to her family, they are out to get some answers from Pedro as they race to confront him. Chantel’s brother River and Pedro come face-to-face for the first time after their fight, and secrets are revealed as the family is forced to open up. Will the divide between Pedro and Chantel’s family grow even more, or will they be able to get over their differences and become closer than ever?

Meanwhile, Chantel’s sister Winter is struggling with her own relationship to boyfriend Jah. Parents Karen and Thomas feel like they know nothing about Jah, despite their five-year relationship, and enlist their trusted private investigator to uncover some shocking secrets. Then suddenly, Pedro’s grandmother falls ill, forcing him to return to the Dominican Republic–but this time, the entire “Family Chantel” is coming with. As relationships are tested and apologies demanded, will this face-to-face meeting end in happiness or total destruction?

Season three of BEFORE THE 90 DAYS follows seven Americans who have fallen in love online. Now they’re traveling overseas in hopes of a marriage proposal with someone they’ve never met in person. The couples get to know each other in a foreign land with the ultimate goal of being together in America.

The couples included in the new season of BEFORE THE 90 DAYS are:

At 18 years old, Avery decided to leave the Christian faith that she was born into and become a follower of Islam, much to the displeasure of her family and friends. Shortly after joining a Muslim dating site, she met Omar. Even though Omar lives in war-torn Syria, they fell in love online and got engaged. Now traveling to meet him for the first time in nearby Lebanon, Avery must decide if a lifetime with Omar is worth the risk of being in an unstable, battle-scarred country.

A hard-working nail technician, Caesar has spent over $40,000 to financially support Maria, the beautiful woman he met online, for the past five years. Now, Caesar is planning to travel to the Ukraine to meet her, but Caesar’s coworkers are afraid she’s been scamming him this whole time. Once he meets her in person, Caesar plans on getting down on one knee and proposing to the woman of his dreams, but is Maria everything she says she is?

As a divorced father with a five-year-old, Benjamin wasn’t having much luck with meeting women from his hometown, so he broadened his search and found Akinyi. Benjamin now has his bags packed for his first ever international trip to meet her in Kenya and ask her parents for her hand in marriage. It won’t be easy, however, as Benjamin is not only the first boyfriend Akinyi has ever introduced her family, but also, as far as they can remember, the first white man to visit their village.

Rebecca has three kids and three failed marriages, including one to a Moroccan man she brought to America on a spouse visa, but she’s ready to try again. She met Zied online and fell in love, despite the concerns of her friends and family that she’s making the same mistakes over again. To discover if their love will last, Rebecca has planned a trip to Tunisia, and her goal is to leave with a ring and a new foreign fiancé.

After coming across Jeniffer’s online profile, Timothy was instantly smitten. Now, he’s traveling to Colombia to meet her in person for the first time and plans to propose. But with Jeniffer being a total knockout, he’s worried she won’t fall head over heels when they finally meet. Plus, Tim’s close relationship with his ex-fiancé, Veronica, as well as the pressure of proving himself to be a capable step-father to Jeniffer’s 18-month-old daughter may be hurdles that neither of them are fully prepared for.

Returning from the second season of BEFORE THE 90 DAYS, fans will catch up with this couple and all their heated drama. When Angela traveled to Nigeria last season for Michael, they each had very different expectations. With six grandkids and little patience, Angela is returning to Nigeria to deliver the ultimatum that Michael change his ways or risk not coming to the U.S. to be with her. But if the past is any indication, things may not work out so easily.

Darcey is back on BEFORE THE 90 DAYS, but this time, she’s got a new man. British businessman Tom is Darcey’s ‘James Bond,’ and he’s just the positive energy she’s been searching for. Although they met online four years ago, pre-Jesse, they never exclusively dated and never met in person. Now, Darcey is finally ready to travel to the U.K. and hopefully start a relationship that will last a lifetime.

Join the conversation on social media by using the hashtag #TheFamilyChantel and #90DayFiance and ‘Like’ 90 DAY FIANCÉ on Facebook for the latest updates. Catch up on the 90 DAY FIANCÉ franchise on TLC.com or by downloading the TLC GO app.

90 DAY FIANCÉ: BEFORE THE 90 DAYS and THE FAMILY CHANTEL are produced by Sharp Entertainment for TLC.”

What do you think? Have you seen 90 Day Fiancé? Will you watch the new spinoff series?

I really like this program. It is amazing what people will go through in search of love

What a perfect ending to Chantel and Pedro’s spin off series! Him carrying her up that staircase

I have watched Chantels family & I have one question. Why make a show of them & their families? It is a joke & his sister is a spoiled smartass brat! She needs an attitude adjustment! I don’t believe any of it but it’s entertaining for a joke & comedy!

Wow. Well look at who is profiting off of Chantel and Pedro’s relationship!! It’s the big mouth Thirsty’s. In fact that is what the show’s name should be called; The Thirsty Family. All that talk about Pedro using Chantel and his family making a profit off of the money that Pedro is earning and sending to his family at home, and look at who’s using Chantel, but her own thirsty family. No doubt , if Chantel was in the same living conditions that Pedro came from Chantel would have sent money home. She is such a wimp. Instead of realizing… Read more »

I won’t be watching! I can’t take Chantel’s family. River is a punk and the mom is crazy. Not saying Pedro’s sister is any better but River did start the fight at the house.not going to watch Chantel’s family “harvesting the American dollar”

Family Chantel..They seem to be all about the ratings!..Her family is LOCO!..They have a need to get involved in Chantel’s life. She was wrong from the beginning by not telling her snoopy family the truth from the beginning about the K1…She has created all the problems!..He needs to leave her as there will never be peace for him. He has been jerked with from the beginning.Chantel and her family are ALL SERIOUSLY DYSFUNCTIONAL! Should be cancelled!

I have watched it from day one. I don’t think I would be to interested in anything to do with Pedro or Chantal. She seems to be so dumb and everything she wears she shows way too much cleavage. She tell her parents everything like a 3 year old. Pedro is just using her and his sister is a big mouth.