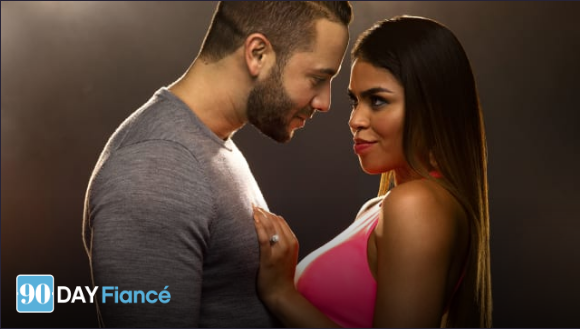 The spin-off docuseries “will follow couples where the American is giving up everything and moving across the globe to be with the person they love.”

(Los Angeles, CA) – How far would you go for love? Fans of 90 DAY FIANCÉ have seen lovestruck foreigners make the big adjustment of moving to America in the franchise that has taken over Sunday night, and now they’ll get to follow hopeful couples on a second night of the week where it’s the American moving abroad in the name of love. 90 DAY FIANCÉ: THE OTHER WAY premieres Monday, June 3 at 9PM ET/PT, with the first hour of the premiere becoming available to watch early on TLC GO beginning Monday, May 27.

90 DAY FIANCÉ: THE OTHER WAY will follow couples where the American is giving up everything and moving across the globe to be with the person they love. Racing against a ticking clock, these six Americans face the challenges of relocating internationally, overcoming major culture shocks, winning over soon-to-be foreign in-laws, and most importantly, trying to make it down the aisle. Will uprooting their lives in the United States pay off or be the biggest mistake ever?

“As part of our ever-growing, ever-popular 90 DAY FIANCÉ franchise, this new series ups the ante with all the drama, emotions and fish-out-of-water feelings our passionate 90 Day fans crave,” said Howard Lee, President and General Manager of TLC. “90 DAY FIANCÉ: THE OTHER WAY is an exciting moment for TLC; strengthening and expanding the franchise that has captured the fascination of viewers across America into its second night of premieres each week and in a whole new way!”

The couples featured in this season include:

Years ago, Sumit catfished Jenny online. After Sumit came clean to Jenny, she forgave him and traveled to India to meet in person. But the four-month trip was cut short when Sumit’s parents refused to accept her. Now, Jenny is ready to move to India permanently, leaving behind her children, grandchildren and friends, while Sumit must figure out how he will marry Jenny without his large, traditional Hindu family finding out.

Laura traveled to meet Aladin after chatting on Facebook for eight months – three days into her trip, they were engaged. Aladin is a young, handsome personal trainer, and Laura is afraid their relationship might be too good to be true. Despite her trust issues and insecurities over their 20-year age difference, Laura is preparing to leave her family, two dogs and retired lifestyle behind to move to Qatar, where she’ll have to get used to a lifestyle that is much more conservative and restrictive than she’s used to. As she battles her culture shock, Laura must attempt to gain the acceptance of Aladin’s family while also planning a wedding in Tunisia.

While on a trip to South Africa with a friend, Tiffany met and fell in love with Ronald, who quickly proposed. Tiffany said yes, but Ronald neglected to tell Tiffany about his gambling addiction and criminal record. Since Ronald came clean and entered a rehab program, Tiffany needs to decide if she will uproot her eight-year-old son Daniel to move across the world for him, in spite of her hunch that she still doesn’t know everything about his dark past.

Corey first met Evelin while on a trip to her small fishing village. After four years of dating, Corey wants to take things to the next level, which means he’ll have to move to Ecuador since Evelin doesn’t want to live in the U.S. Already having spent tens of thousands of dollars on Evelin and her family, Corey is fully invested in the relationship. But moving to Evelin’s hometown will mean accepting a simpler way of life, including poor electricity and no running hot water.

After hitting it off on a dating app, Jihoon flew to Utah to meet single mom Deavan in person, and they wound up getting pregnant the first night they met. Deavan hopes to get married and move to South Korea, but the language barrier and lack of proposal aren’t the only things holding her back: Jihoon’s parents may not bless their marriage after the dishonor of getting pregnant out of wedlock. With her three-year-old daughter from a previous relationship and a soon-to-be newborn baby in tow, Deavan must overcome all obstacles in hopes of moving with her children to South Korea to be with someone she’s spent hardly any time with in person.

Paul and Karine have a complicated history that began with Paul traveling down the Amazon river to meet Karine for the first time on 90 DAY FIANCÉ: BEFORE THE 90 DAYS. Now married and with a baby on the way, they’re hoping for a smooth future. But when Paul learns he can’t afford Karine’s visa to America and isn’t able to convince his mother to become a co-sponsor, he must come up with a new plan: move to Brazil himself. With only three months to prepare for their baby, will Paul and Karine be able to make things work this time around?

Join the conversation on social media by using the hashtag #90DayFiance, ‘Like’ the show on Facebook, and follow TLC on Twitter and Instagram for the latest updates. Catch up on all episodes from the 90 DAY FIANCÉ franchise on TLC.com or by downloading the TLC GO app

90 DAY FIANCÉ: THE OTHER WAY is produced by Sharp Entertainment for TLC.”

What do you think? Are you a fan of 90 Day Fiancé? Will you watch the new spin-off?