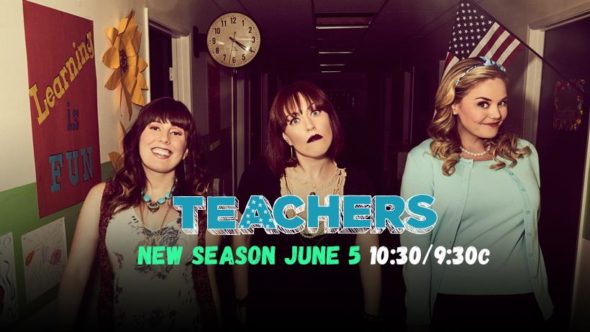 Last year, the demo numbers for the Teachers TV show on TV Land dropped by 9%, while the total audience grew by nearly 27%. By broadcast standards the ratings were minuscule, but the sitcom was still the cable network’s second-best performer in the Nielsen ratings. How will it do in the third season? Will Teachers be cancelled or renewed for season four? Stay tuned. **Status update below.

A TV Land single-camera comedy, Teachers is based on a web series of the same name from The Katydids improv group. The series revolves around six elementary school teachers who are trying to mold young minds — but their own lives aren’t really together. It stars Caitlin Barlow, Katy Colloton, Cate Freedman, Kate Lambert, Katie O’Brien, and Kathryn Thomas.

What do you think? Do you like the Teachers TV series? Should TV Land have cancelled or renewed this TV show for a fourth season?

**Status update 11/20/2018: Teachers has been cancelled by TV Land. Details, including the Teachers season 3B premiere date, here.

The formula for comedy today is ridiculous and exactly the same for every new show, especially on TBS, TNT & TVLand. Totally stupid people with ZERO morals. These are two of the biggest problems that our country faces today, and I don’t find them at all funny. Just sad. Apparently I’m not alone.

Just happened to see this show tonight for the first time … How disgusting and degrading to all the reputable teachers in our country ! ! Can’t believe that a show like this is even allowed to be on t.v. To me it was borderline pornographic and absolutely disgusting ! !

I think teachers is degrading to real teachers in life they have the fowlist mouths.

I hope “Teachers” gets renewed for another season.

I enjoy watching “Teachers” it is a fun twist on reality.

You got that right girl ! Just horrific and absolutely DISGUSTING ! !