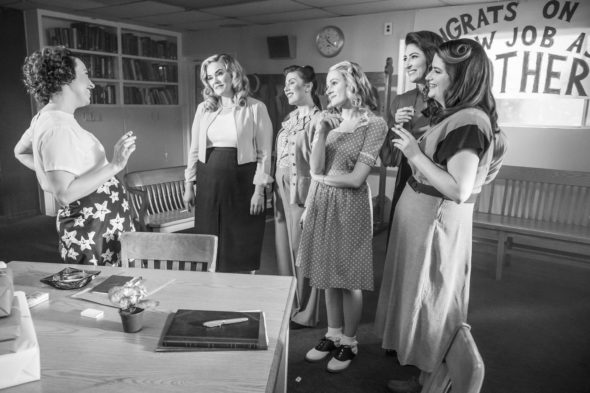 Just when the rest of the country is enjoying its summer vacation, the fine folks at Fillmore Elementary are itching to get back to school. “A storm’s a-coming,” so watch the downright contagious Teachers first look teaser, below. The third season of its Teachers TV show premieres on Tuesday, June 5, 2018 at 10:30pm ET/PT, immediately following the Younger season five debut.

A TV Land sitcom, the Teachers TV series grew out of a web series of the same name, from The Katydids improv group. While the series revolves around six elementary school teachers who are trying to mold young minds — their own lives aren’t really together. Caitlin Barlow, Katy Colloton, Cate Freedman, Kate Lambert, Katie O’Brien, and Kathryn Thomas star.


The Itching Head. Wait till the end to find out the Season 3 premiere date! #TeachersSeries @thekatydids @tvland pic.twitter.com/UI5JFHZb5w

Learn more about the third season of Teachers from this TV Land press release.

New York, NY – March 29, 2018 – Fillmore Elementary educators are back in session with their hilarious antics when Season three of “Teachers” premieres Tuesday, June 5th at 10:30pm ET/PT on TV Land, following the season five premiere of “Younger.” After a much needed long recess, the leaders of the playground are back and ready to conquer a new school year. Last season, Variety hailed the cast, stating, “in terms of acing the midterm, the Katydids have indeed done it,” while Bustle said “the female-driven sitcom is hilarious, insightful, and totally cute.”

The first-look teaser shows the Fillmore Elementary heroines fighting the spread of the vicious and highly contagious lice epidemic. The Teachers are put to the test when the dreaded curse of creepy crawlers enters the classroom, and the question remains – who will make it out alive?

“Teachers” revolves around a group of elementary school teachers who are trying to mold the minds of America’s youth, but don’t have their own lives together at all. The series is created by and stars the improv group The Katydids – Caitlin Barlow (Ms. Cannon), Katy Colloton (Ms. Snap), Cate Freedman (Ms. Feldman), Kate Lambert (Ms. Watson), Katie O’Brien (Ms. Bennigan) and Kathryn Renée Thomas (Mrs. Adler). Along with The Katydids, showrunner Ian Roberts executive produce the series. Matt Miller, Alex Fendrich and Matt Abramson are also executive producers.

What do you think? Are you a fan of the Teachers TV show? Do you plan to turn in for the season three premiere? Let us know, below.