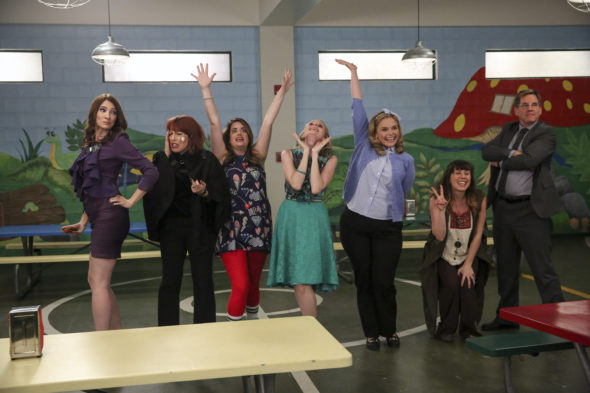 TV Land is going back to school. The Teachers TV show has been renewed for a third season on TV Land. The sitcom is based on The Katydids improv group’s web series.

New York, NY – April 20, 2017 – TV Land has renewed its most-watched and critically acclaimed comedies, “Younger” – which has been named “one of the juiciest comfort-watches” by BuzzFeed – and “Teachers,” which The Hollywood Reporter called “a little surprise gem,” it was announced today by Frank Tanki, General Manager of TV Land. “Younger,” which returns June 28th for its fourth season, has been picked up for a 12-episode fifth season, while “Teachers,” which returns with the back half of season two this fall, has been renewed for a 20-episode third season. This news comes on top of the early second season renewal of the newly-launched comedy “Nobodies,” which stars Hugh Davidson, Larry Dorf and Rachel Ramras, and is executive produced by Melissa McCarthy and Ben Falcone through their production company On The Day, as well as showrunner Michael McDonald.

“We’re absolutely thrilled to be bringing back ‘Younger’ and ‘Teachers’ for more seasons and double down on our dedication to creating smart, funny, honest and compelling originals,” said Tanki.

Descriptions of all the series are below:

“Younger,” from “Sex and the City” creator Daren Star, stars two-time Tony® winner Sutton Foster, Hilary Duff, Debi Mazar, Miriam Shor, Nico Tortorella, Peter Hermann and Molly Bernard. The series follows Liza, a 40-year old woman who pretends to be 26 in order to get a job in the highly competitive world of publishing – and succeeds. Last season, as Liza continued her lie, her two lives became irreversibly intertwined – with her longtime best friend, Maggie (Mazar), new friend and partner at Empirical, Kelsey, prickly boss Diana (Shor), and everyone in between, becoming part of the same world. In the season three finale, Liza came to realize the damage her secret has caused and finally unveiled the truth to Kelsey (Hilary Duff). Now Liza will be forced to deal with the fallout of her deceit and learn that the truth hurts. Season four premieres Wednesday, June 28th at 10pm ET/PT. Season five will premiere in 2018.

“Teachers” revolves around a group of elementary school teachers who are trying to mold the minds of America’s youth, but don’t have their own lives together at all. The series is written by and stars The Katydids – Caitlin Barlow, Katy Colloton, Cate Freedman, Kate Lambert, Katie O’Brien and Kathryn Renée Thomas – and so far in season two, great guest stars have popped up, including Haley Joel Osment (“Alpha House,” “Comedy Bang! Bang!”) as Mrs. Adler’s husband, Ryan Hansen (“Party Down”) as Ms. Snap’s rival in a school council race, Jessica St. Clair (“Playing House”) as the school counselor, and many more.

The rest of season two, returning this fall, will see Ms. Bennigan (O’Brien) keep naively pursuing Hot Dad (guest star Ryan Caltagirone), Mrs. Adler and Ms. Feldman (Freedman) dealing with a “serial pooper” around the school, and even an entire episode taking place in the 1940s. Season three will premiere in 2018.

“Nobodies” stars and is executive produced and written by Groundlings alums Hugh Davidson, Larry Dorf and Rachel Ramras and revolves around the three as they try desperately to land one of their famous friends for a feature script that they have developed, so that they, too, can rise to fame in Hollywood. Davidson, Dorf and Ramras are partnering with their real-life friends, Emmy® winner Melissa McCarthy and Ben Falcone, who executive produce “Nobodies” through their production company, On The Day. Michael McDonald (“MadTV”), also a former Groundling, is showrunner and also serves as executive producer and director. Guest stars this season include McCarthy, Falcone and McDonald, as well as Kristen Wiig, Kristen Bell, Allison Janney, Jason Bateman, Maya Rudolph, Leslie Bibb, Jim Rash, Nat Faxon and many more.  “Nobodies” can currently be seen on TV Land on Wednesdays at 10pm ET/PT. 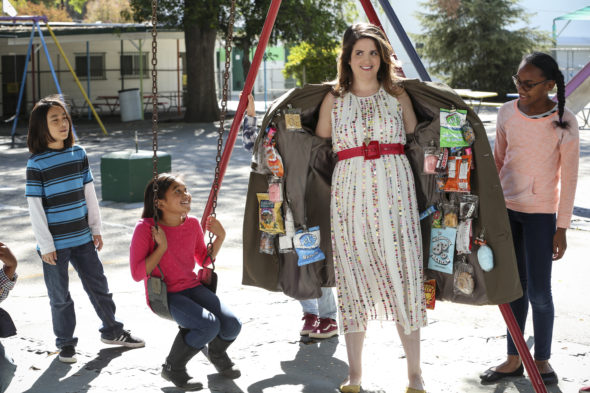 What do you think? Are you a fan of the Teachers TV series? Do you plan to check out season three on TV Land? Tell us.

Teachers is an awesome show, but the rest is garbage.

Teachers is stupid, childish and shrill. I cannot imagine why anyone would watch it.

This is with out a doubt the worst of the worst
TV entertainment. It make me sick just looking at the commercials for it. TRITE!!