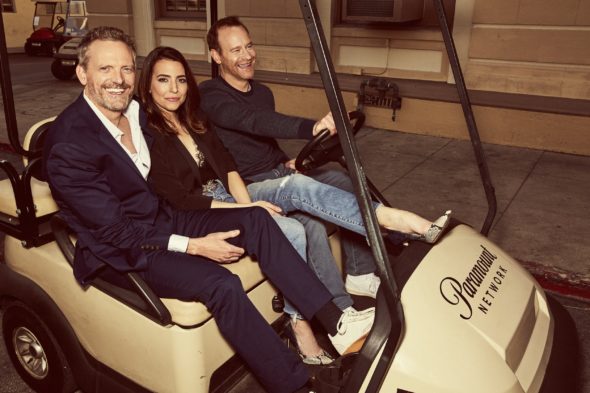 Hugh, Larry, and Rachel are making their way to a new network, but will they gain any renown? Season two of the Nobodies TV show will premiere on Paramount Network on Tuesday, March 29, 2018 at 10:00pm ET/PT. The first season aired on Paramount’s sister network, TV Land.

Learn more about the second season of Nobodies from this Paramount Network press release.

“Nobodies” follows Groundlings alums Hugh Davidson, Larry Dorf, and Rachel Ramras as they navigate life on the outskirts of fame and try – again – to “make it” in Hollywood; with help from their more-famous friends. The season 2 trailer showcases appearances from the stars’ real-life friends including Kristin Wiig, Sia, Leslie Bibb, Cedric The Entertainer, and executive producers Ben Falcone and Melissa McCarthy. Gosselaar will appear in all 12 episodes.

The 12-episode half-hour comedy series is executive produced by Melissa McCarthy and Ben Falcone (through their On the Day productions) with Michael MacDonald (“MADtv”) serving as Executive Producer, Director, and Showrunner, and is written and executive produced by stars Davidson, Dorf, and Ramras.

What do you think? Are you a fan of the Nobodies TV series? Do you plan to follow it from TV Land to Paramount Network for season two? Let us know, below.