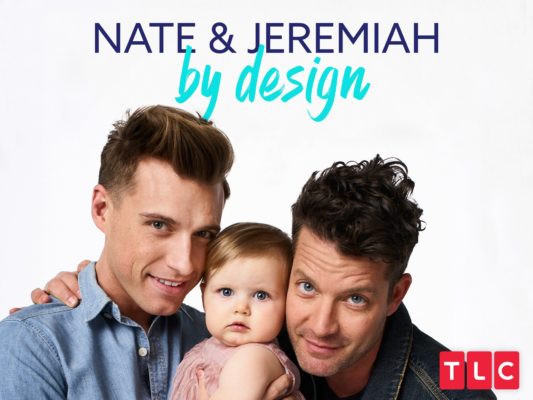 What’s next for Nate & Jeremiah By Design? TLC just announced the TV show will return for a third season in April.

The docuseries follows interior designers and married couple Nate Berkus and Jeremiah Brent as they “save desperate homeowners whose ‘money pits’ have left them overwhelmed and defeated.”

Season three of Nate & Jeremiah By Design premieres on TLC on April 13th at 9 p.m. ET/PT.

(Silver Spring, MD) – Interior design couple Nate Berkus and Jeremiah Brent return to TLC to save desperate homeowners whose ‘money pits’ have left them overwhelmed and defeated. Premiering Saturday, April 13 at 9/8c, this season of NATE & JEREMIAH BY DESIGN is a renovation rescue of epic proportions, as the married duo balance work and family, while coming up with innovative design solutions for homeowners in crisis.

“We are proud to have Nate, Jeremiah and their adorable family return to Saturday nights this Spring on TLC,” said Howard Lee, President and General Manager for TLC. “NATE & JEREMIAH BY DESIGN, now in partnership with Scott Brothers Entertainment, is a fan-favorite part of our property mix. We can’t wait to share what the guys have in store this season as they transform homes and warm hearts across America.”

“Nate and Jeremiah are incredibly talented designers with such an authentic and meaningful approach to their craft,” said Jonathan Scott, Executive Producer and Co-founder of Scott Brothers Entertainment.

Added Drew Scott, Executive Producer and Co-founder of Scott Brothers Entertainment, “We’re beyond excited for the launch of the new season, and we’re always inspired by their dedication to giving families something we all fundamentally deserve: a space that feels like home. It’s an amazing thing to be able to help as many people as they do.”

This season the stakes are even higher, and Nate and Jeremiah are pulling out all the stops to tackle the most challenging renovations to date. In each episode, viewers will see families whose ‘money pits’ have strained relationships and drained finances, and it’s up to Nate and Jeremiah to save the day. These design heroes aren’t just transforming homes, they’re saving relationships and reviving dreams – one reno at a time.

Through it all – the bad renovations, failed DIY projects and traditional ‘money pits’ – Nate and Jeremiah somehow find time to spend with the two most important people in their lives: almost four-year-old daughter Poppy and the newest member of the family, 11-month-old Oskar. The proud parents bring the audience inside their private lives to see how they juggle demanding careers and a young family.

The season features couples in a wide variety of desperate situations:

� Albert and Anna have found each other later in life and are tired of trying to make up for lost time when it comes to their dream home. Albert wants to give Anna a walk-in closet and master bedroom, but the budget is just not there.

� Life has been up and down for Lauren and George, who found out that they are expecting soon after buying their first home and after Lauren lost her job.

� Meanwhile, the Barnes family of four have been sleeping on air mattresses on the floor until their stairs to the second floor are renovated.

� To top off the list, the Picarellis’ weekly Italian Sunday dinners mean that their kitchen and dining room have to somehow accommodate more than 30 family members.

With such fraught circumstances, it will take a whole lot of talent and creativity to get the job done. Luckily for these families, Nate and Jeremiah are up for the challenge.

Join the conversation on social media using #NandJbyDesign and make sure to ‘Like’ the show on Facebook for the latest updates. Download the TLC GO app to catch up on past episodes of Nate and Jeremiah by Design.

NATE & JEREMIAH BY DESIGN is produced for TLC by Scott Brothers Entertainment.”

What do you think? Have you seen Nate & Jeremiah By Design? Will you watch the new season?

Love Nate and Jeremiah! So glad the are coming back 🙂

I am very confused. The episodes flagged as new for season three are actually reruns. They have poppy and not Augie. The episodes airing as season one have both kids and appear to be the newer episodes

And the show is now called Nate and Jeremiah save my house.

Love the show! Besides their design gifts, I am moved my their emotional investment in their family and those of their clients.