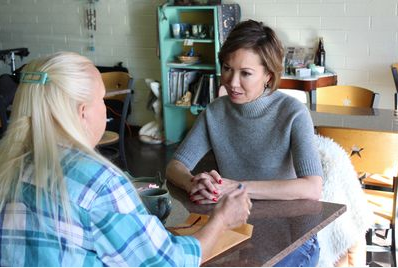 Hosted by Chris Jacobs and Lisa Joyner, the docuseries “offers viewers the chance to hear stories from people who have endured a lifetime of separation, and who long to finally be reunited with family members with whom they share an innately deep connection – but who, in many cases, they have never met.”

(New York, NY) – TLC’s moving docu-series LONG LOST FAMILY, led by hosts Chris Jacobs and Emmy Award-winning journalist Lisa Joyner, both of whom are adopted and have personal experience tracing their own biological family members, returns for a third season on Sunday, April 8 at 10/9c. This series offers viewers the chance to hear stories from people who have endured a lifetime of separation, and who long to finally be reunited with family members with whom they share an innately deep connection – but who, in many cases, they have never met. As the individual participants embark on these emotional journeys, their lives will be changed forever.

In each episode, Chris and Lisa focus on two unique stories in an effort to resolve the lifelong searches previously ensued by the participating parties. With everything from closed adoptions, to family secrets standing in their way, the path to finding long lost family members is always different and extremely challenging, and the stakes are high. Not only does a successful search bring the possibility of a heartwarming reunion, but also a chance of redemption for people who have been subject to decades of emotional agony.

Over the course of this season, viewers will meet a woman haunted by the memory of the sister she first met, and last saw, in a courtroom at the age of seven; a man, who at 48 years old, was traumatized to find out he was adopted, after his adoptive parents had already passed away; and a man who discovered that the mother who placed him for adoption already had three sons whom she kept.

Utilizing whatever resources they can – from public records and archives, to tracing family trees, to cutting edge Ancestry DNA technology – Chris and Lisa will leave no stone unturned in pursuit of their target. As each case unravels, and unexpected details surface, a lifetime of pain and guilt will ultimately give way to a new and profound familial relationship.

Join the conversation on social media by using the hashtag #LongLostFamily, ‘Like’ the show on Facebook, and download the TLC GO app to catch up on past reunions.

Ancestry, the global leader in family history and consumer genomics, is re-teaming with TLC as a partner of the new season of LONG LOST FAMILY. Based on their partnership, Ancestry provides personal DNA testing and family history research on each of the featured individuals to help make new family discoveries possible.

LONG LOST FAMILY is produced by Shed Media, a division of Warner Bros. Unscripted & Alternative Television under the leadership of Mike Darnell, for TLC. Based on the format entitled Find My Family/Spoorloos, devised by KRO-NCRV and distributed by Lineup Industries.”

What do you think? Have you seen Long Lost Family? Will you watch the new season?

I love this show. I was given up at birth and did the ancestry test to find my family last year. I can truly relate to the people on this show

I am a birth mother that has been searching for years for my son. This show is to painful for me to watch, although happy for the reunions, it breaks my heart to see them reunited. All I have been able to find out is concrete and steel walls.