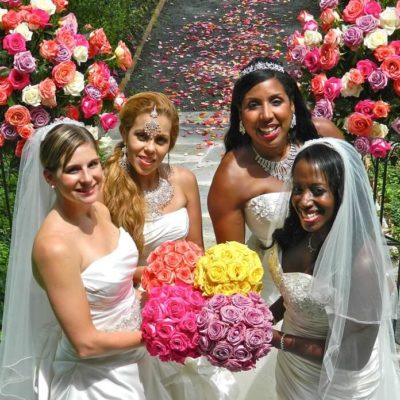 TLC is ready to unveil the return of their Four Weddings TV show. “Every bride thinks she’s having the perfect wedding, but what if four brides agree to be guests at each other’s weddings to decide which is best?”

The series returned for a special two-hour episode back in January 2018 (designated as the first installment of season 10 on the TLC site) and now, additional two-hour installments will begin airing on Saturday, July 21st, at 9:00 PM. It’s unclear how many episodes have been ordered.

Here’s more information, as well as a teaser video, from TLC:

(New York, NY) – Over the years, viewers have seen what happens when four opinionated brides comment on and rate each other’s weddings, but things get personal this season on TLC’s FOUR WEDDINGS, premiering Saturday, July 21 at 9/8c. In a brand-new twist, the featured brides are not strangers, rather they are close friends and/or family members – and the grooms are teaming up with them to help pull off their magical day.

In the series’ new two-hour format, these blushing brides, who are all getting married around the same time, will evaluate each other’s weddings based on six categories: venue, food, dress, entertainment, originality and overall experience. The bride with the highest score will win an all-expenses-paid honeymoon for herself and her husband.

With such a considerable prize on the line, the veils are coming off as the brides engage in some friendly competition and naturally try to one-up each other in their quest to nab the top prize. Fans will tag along with the brides as they plan and shop for every element of their weddings, including the dress, the cake, the decorations and more. From a countryside barn, to a winter wonderland extravaganza, to twists and turns never-before-seen on FOUR WEDDINGS, this season is full of hilarious, emotional and unforgettable moments that will captivate viewers through the last dance.

“TLC is the premier destination and trusted source for all things wedding, and our passionate fans continue to say ‘I Do’ to our wedding content,” said Howard Lee, President and General Manager of TLC. “We put this genre on the map with signature long-running franchises like ‘Say Yes to the Dress’ and we are proud to bring back fan favorite ‘Four Weddings,’ inviting audiences to fall in love all over again.”

In the premiere episode, fans will be introduced to four St. Louis brides with strong family ties. Far from traditional, Maggie goes for an outdoor December wedding while her soon-to-be sister-in-law, Ashley, goes full-on glitz and wedding glam. Family friend Lexi is staking it all on her celebrity chef’s extravagant desserts and Cousin Kat believes it’s not a wedding until everyone is on the dance floor! These brides are always there for each other through thick and thin, but will their relationships remain intact after they go head-to-head to win a honeymoon to a surprise destination?

During the premiere episode of FOUR WEDDINGS, fans can show which bride they’re rooting for to win the honeymoon of their dreams. They will be able to vote using Facebook reactions at Facebook.com/FourWeddings.

Join the conversation on social media by using the hashtag #FourWeddings, ‘Like’ the show on Facebook and watch full episodes by downloading the TLC Go app or visiting: TLC.com/FourWeddings.

FOUR WEDDINGS is produced by ITV Studios, Inc. for TLC.

TLC is a global brand available in more than 87 million homes in the US and 279 million households around the world. Viewers can enjoy their favorite shows anytime, anywhere through TLC GO – the network’s TVE offering featuring live and on demand access to complete seasons. A destination online, TLC.com offers in-depth fan sites and exclusive original video content. Fans can also interact with TLC on Facebook, Instagram, Twitter, Snapchat and Pinterest. TLC is part of Discovery (NASDAQ: DISCA, DISCB, DISCK), reaching 3 billion cumulative viewers in more than 220 countries and territories to satisfy curiosity and captivate superfans with a portfolio of premium nonfiction, lifestyle, sports and kids content brands.

What do you think? Are you looking forward to the return of the Four Weddings TV show on TLC? Would you like to see it stick around for additional seasons?

I think the series is interesting, suspenseful and funny. When will the new rebooted season return? They stopped showing new ones in August.

Your “judges” have zero class and should at least dress for a wedding, and fix their hair. THEN I could respect their critique. Some of these brides cannot afford what these women expect. Just seems like one more TV Show of women shaming other women. NOT a fan.

I’m not looking forward to the series as I’m wondering why give a Free honeymoon to some of these couples who clearly have money! In my humble opinion I think it be a huge hit if it was for couples who were on a small budget but could pull off a beautiful elegant or just really creative great wedding! Then the honeymoon of the magnitude they give would be justified & BETTER well received!!

The new format is awful. We don’t need to know all that stuff about them and the show is too long. Also, using friends or family brides is sure to break up friendships. Do the producers think the competition between friends won’t cause resentments? Too bad.

Hate the new format. Too much detail about their lives. Slow moving and boring. Too bad. I really used to love watching this show.

I love the Four Weddings concept. I like that the girls know each other in new format but I absolutely do not like the 2 hour length. It’s way too long. I prefer the hour format better.

The brides are friends so they’re all the same. This week, we had all barn weddings. Boring
,

No I am not looking forward to the new season of Four Weddings. We all tweeted our hatred of the 2 hour format that they showed earlier this year to TLC. Guess they didn’t listen.

Not a fan either. The brides speak in a cruel manner about the other ones and nothing is ever good enough. Too much food or too little. Food salty or not seasoned. Centerpieces too high or not high enough. Dresses too much or not enough. They can’t ever be satisfied. Just too much bad talking. Will not watch.