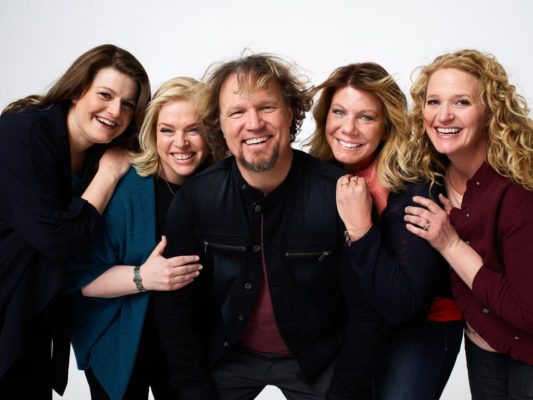 TLC is ringing in the new year with some new episodes. This week, the network announced both Sister Wives and Seeking Sister Wife will debut new seasons in January.

Season eight of Sister Wives (January 20th at 8 p.m. ET/PT) “will follow Kody, Meri, Janelle, Christine and Robyn Brown as their family confronts new challenges, old wounds and the end of an era as they embark on a new chapter of their lives.”

(Silver Spring, MD) – Love, chaos and uncertainty abound in TLC’s fan-favorite returning series SISTER WIVES and SEEKING SISTER WIFE beginning January 20 at 8/7c. The new season of SISTER WIVES, which includes eleven new episodes, will follow Kody, Meri, Janelle, Christine and Robyn Brown as their family confronts new challenges, old wounds and the end of an era as they embark on a new chapter of their lives. Then, the unfamiliar world of polygamous courtship unfolds with thirteen new episodes of SEEKING SISTER WIFE, featuring two familiar families from last season and two brand-new ones.

The beloved Brown family returns with the sound of wedding bells for Aspyn and Mitch, but not all is bliss for the four wives. Last season, Meri and Kody struggled to keep the heat in their marriage, and things are about to cool down even more. All mayhem breaks loose when Kody reveals the family doesn’t have the money to support Meri’s bed and breakfast venture. Plus, old wounds are reopened when Meri revisits her catfish experience by inviting new friend Kristie, who was a victim of the same catfish, to meet the family and better understand what they’ve all been through.

Meanwhile, wedding fever is in full swing when Mitch pops the question and Aspyn says yes. Maddie and Caleb, who recently welcomed baby boy Axel into the world, decide it’s time to move into a place of their own and Janelle has a hard time letting go. Christine is confronted with the daunting reality that her daughter Ysabel may need surgery for her scoliosis. Further adding to the chaos, Kody drops a bomb when he announces he wants to move the family out of Nevada and to a new state.

Following an explosive first season, viewers once again get an intimate look at the ups and downs of starting or expanding a plural marriage. The families featured in season two include:

Since their failed attempts at courtship last season, Dimitri and Ashley have started dating Vanessa, a vivacious woman from Seattle. By all accounts, Vanessa seems like the sister wife of their dreams – someone whose rapport with Ashley is equal to her chemistry with Dimitri. In the midst of their budding romance, the Snowdens decide to move across the country from Atlanta to California and invite Vanessa to leave her life in Seattle and start this new journey with them. Their courtship veers into unpredictable territory as Vanessa has to jump a multitude of hurdles in order to earn a commitment and Ashley’s blessing to become intimate with Dimitri. And ultimately, the trio must confront formidable naysayers who could jeopardize their tender romance.

The Alldredges also embark on a new beginning as transplants to Hot Springs, South Dakota. Regrouping from last season’s devastating outcome of their courtship with Melina and Vanessa’s molar pregnancy, they are in the process of building a vast new compound in which they ultimately intend to house more sister wives and more children. With renewed hope, the Alldredges find a sensual woman named Jennifer and begin courting! But after an epic rendezvous at Niagara Falls, Jennifer’s sudden change in behavior blindsides the family.

After a fire destroyed their Brandon, Mississippi house, Paige and Bernie moved with their two young sons and two dogs into a tiny mobile camper. Rather than letting it get them down, the McGees seize this as an opportunity to embrace a fresh start. Bernie and Paige were previously seeking a sister wife for several years, but their previous attempts sparked jealousy in Paige. After taking a break from the search, they are now ready to dust the cobwebs off their dating profile and put themselves back on the market! Their foray into online dating yields a promising candidate named Brandy, and they seem to be on a fast track to plural harmony, until Paige’s jealousy returns and threatens their hope of ever expanding the McGee tribe.

First wife, Tami, and second wife, Sophie, have developed a harmonious way of splitting Colton’s time despite living in two separate but nearby communities in Southern Utah. They all find common ground in their fundamentalist Mormon beliefs, but were excommunicated from the church for practicing polygamy. Although Colton and Tami have been married to Sophie for about a year, the trio has yet to expose themselves as polygamists to the public. They encounter obstacles and supporters in unexpected places as they begin to test the waters of being openly plural. After struggling to find someone that meets the criteria they are looking for in a sister wife, the Winders finally find a prospect who is interested in the family, but she is not interested in revealing herself to the world as being plural. This presents a stark reminder about the perils of being openly polygamous and they are forced to make a decision: should they push forward in their attempts to go public and hopefully normalize their lifestyle, while risking losing someone that could be the next member of their family?

Join the conversation on social media using #SisterWives and #SeekingSisterWife and make sure to ‘Like’ TLC on Facebook for more updates!

SISTER WIVES is produced by Puddle Monkey in association with Figure 8 Films for TLC. SEEKING SISTER WIFE is produced for TLC by Discovery Studios.”

What do you think? Have you seen Sister Wives and/or Seeking Sister Wife? Will you watch the new seasons?

I love this show and you didn’t have that many to watch. All needs to watch more going on with the family

will SEEKING SISTER WIFE come back the next season. i love the show.

I am tired of Kody Brown. I like some of the wives, but his attitude is way over the top. Would not watch another season. There are better shows out there to watch.

setiously..when are u gonna make THE SNOWDENS reality. they are the BEST. I love their idea they have made real. i love the calmness that is theirs…I LOVE THEM. REALITY SHOW REALITY SHOW.

I love watching Sister wives, that are raising successful children and they are marrying and having children. Please keep this show on to see where the children go from here

I don’t agree with this kind of lifestyle. But if your going to live it, live it for the right reasons Not because you want to sleep with other women and be married at the same time and that is Bernie McGee want Not to live the life style but just to sleep around…

Please consider lengthening The Snowdens time on “Seeking Sister wives to either a half an hour with The Alldredges being the other half of the timer my preference allowingTh Snowdens to have an entire hour to themselves. Their situation is so interesting, their 15 minutes is entirely too short! The other 2 families are very uninteresting, I just fast forward by them.( the McGee’s and the Winders) Please consider my suggestion!! Thanks for your time!

The Brown family is a perfect example of why polygamy just doesn’t work. I’ve tried not to be judgmental but they are “drama, drama, drama” all the time. Meri needs to be honest with fans and just admit this isn’t the lifestyle for her.

Love watching this family!! Can’t believe they moved to Arizona!