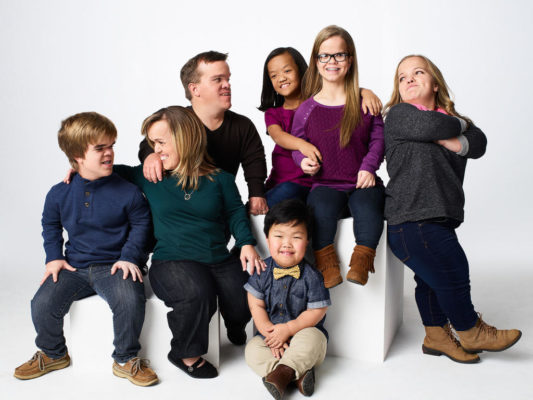 The 7 Little Johnstons are back! Today, TLC announced the TV show will return for its fourth season later this month.

The docuseries follows the Johnstons, a family of seven all living with Dwarfism. The new season will see parents Trent and Amber move the family to a new house and “discover that their new home isn’t as perfect as it looks on the outside.”

The world’s largest known little family is making big moves in a brand new season of 7 LITTLE JOHNSTONS, premiering Tuesday, October 30 at 8/7c. Trent and Amber move the brood to a new house and are excited to start making memories, but they soon discover that their new home isn’t as perfect as it looks on the outside. Daughter Elizabeth copes with a painful break up, but tries to put her focus on a local art show she is passionately participating in. The other Johnston kids continue to have new experiences of their own as Jonah graduates from high school and begins dating; Anna takes on more responsibilities at home; Emma starts cheerleading and Alex begins vlogging. Meanwhile, Trent and Amber celebrate their 20th anniversary and consider risking everything for the dream of starting their own family business.

7 LITTLE JOHNSTONS is produced by Figure 8 Films for TLC. Join the conversation on social media by using the hashtag #7LittleJohnstons, and ‘Like’ TLC on Facebook. Catch up on full episodes of the show by downloading the TLC GO app or clicking here.”

What do you think? Have you seen 7 Little Johnstons? Will you watch the new season?

ONE of the best TV shows on. We watch it faithfully and it would be a big mistake to cancel this show. What a great family example and great parents.

I love watching 7 little Johnstons as it’s very inspiring. I wondered what happened to their pup Louie, the French Bulldog last season? Last time I saw Louie was loading into their van when they moved out of their house. Since I did not see him in this season in their new house, only Jessie the chocolate lab, did I miss out? Why Louie was not mentioned during last night S5 E6 when they talked about their pets…

LOVE this show !!!!!!!!!! Very inspiring of family life ! I see your challenges and think, wow, how great you handle that ! But what I most enjoy about this show is the genuine parenting, upbringing of the children, and dealing with family in reality. Your family morals reflect an inspiration for us all to follow !!!! And I must say, Alex is a cutie of a person to watch and learn from ! Thank you all for sharing your life with genuine emotions that we can connect with and learn to better ourselves !!!

I absolutely LOVE, LOVE, LOVE The Johnstons❤️❤️ They are such a fun and loving family. They meet all of their challenges with such understanding and caring of each member of the family members. They are so supportive of each other and the parents guide their children with wisdom and grace. I feel a part of this family each week. Please keep them on the air as long as they continue to want to share their lives with us❤️❤️❤️

Love the show and whole family. I really enjoy watching them over come their challenges. Please continue to keep them on.

LOVE, LOVE, LOVE 7 LITTLE JOHNSTONS, THEY ARE ONE OF MY FAVORITE FAMILIES ON TLC!!