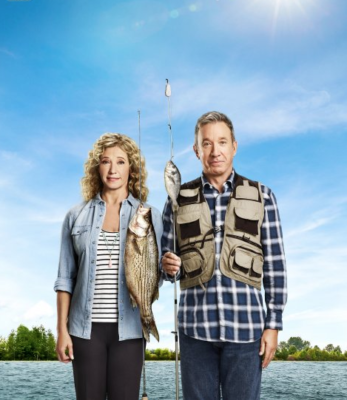 In the interview, Abbott revealed he hasn’t heard from ABC about Last Man Standing‘s recent premiere:

Matt Berry, another EP on the show, heard congratulations from [programming head] Vicky Dummer, who we love at ABC. I heard that our cold opening [mocking ABC for canceling the show] was circulating around ABC beforehand. There’s no ill will. We did that [opening] for good fun and because we’re terrible people. It’s just business and this is what happens. Actually, this never happens [laughs]. It’s probably not the best day over at ABC programming but it’s a good day for us.”

And what about all the recasting? Both the role of Mandy and Boyd were replaced for season seven:

You don’t take a character played by an actress that’s beloved and suddenly switch them out. I’m glad they missed Molly Ephraim, that’s a good thing. And they’re going to go through the same process we did in casting. When Molly McCook walked in we thought, “that’s not going to work.” Physically that’s not going to work. And then she’s just so good. We thought maybe another character? Then we thought she’s the best actress, let’s go with it. We had some fun with it in the opening episode [about the physical differences between the actors] and then dropped that. It’s a little jarring then you grow to love her.”

Fox was hoping for 80 percent of what we were doing on ABC so about a 1.0. Because I knew it was doing gangbusters in syndication, I was optimistic for a 1.3, 1.4, thinking if everything breaks right that’s what we’ll get. So I’m an idiot. I don’t think anybody expected this. It’s a little hard to absorb. I looked at the number and I thought it was a misprint. It’s very gratifying. But yeah, nobody expected this.”

What do you think? Are you a fan of Last Man Standing? Did you watch the season seven premiere?

Omigosh! LOVE this show. I can totally see the new Molly/Mandy fitting in. It just takes time to integrate with the other actors. Boyd, I couldn’t care less about. I watch the show because I love the story lines, comedic opinions and the interaction Tim Allen’s character has with his wife Vanessa, neighbor Laraby, Ed at work, kids and the public at large. My millenial kids love this show, too! Welcome back Tim… we missed you all

I agree, I did not like the new Mandy. I think it was a mistake to go with a taller, blonde, and not as funny replacement. I think they could have found someone better. Boyd is a growing kid and does not seem as out of place as Mandy. Disappointed in that, but I’m still and have always been a fan of the show. I will continue to watch even though Mandy is not a “loveable”character. Maybe she will grow on us. I think the jokes about switching network were right on. I don’t think they should’ve cancelled it in… Read more »

Love the show but replacing Mandy with such a different person was not a good idea, in my opinion. They should’ve replaced her with the same type, size, etc. Making fun of ABC cancelling the show was very annoying and I believe, took away from the show with us trying to get used to the new Mandy. Unsure if I will continue to watch.

I agree. The writers should have thought of a way to have Mandy “ go overseas to start marketing her garments and has her do a few cameo shows. The new Mandy isn’t that good an actress in my opinion. Show isn’t the same. I like Kyle’s hair cut however.

Love the show I just miss the other mandy

Yes I love the show

Best family sitcom! New Mandy was a little disappointing but the writing is really good so I’m in. Much better than Murphy’s reboot.

They should have just written Mandy out of the show. My husband and I did not care at all for the actress that has taken her spot, she just does not fit in. The original actress that played Mandy played it to a tee! This one, I just have no words. I loved the shows premier, minus that character. Not sure how many episodes I can watch with her in it.

You can’t write her out without having to write Kyle out as well,

Sure you can, just have her off working the fashion industry in some place like New York while her husband continues to work for her father.

Sure they could have. They could have had where they built the house on the land Kyle’s mother left them and had Molly Ephraim come back the same way Kaitlyn Dever came back as a recurring guest star. Then we would see Kyle at Outdoor Man. I would have preferred that to the new Mandy.

I loved the characters but one was out of place and it stuck out like a sore thumb. Mandy was stiff and her timing was slightly off. I’m glad they weren’t as political as the new Murphy Brown. It is hard in this political atmosphere to not be too off-puttingly onesided. Welcome to the new channel!!! Fox made a good choice!

Molly McCook that’s playing Mandy Baxter in Last Man Standing she does not fit the part she’s not catching lines very well she just not funny . Sorry can’t get the original Mandy back but I don’t think the show is going to be back for another season that’s just me and I really like this show I was so happy they brought back last man standing maybe if they replace her find somebody that fits the role a little better that’s funny that catch the lines Maybe the show will last for one more season or two more season.… Read more »

give her more than one episode.