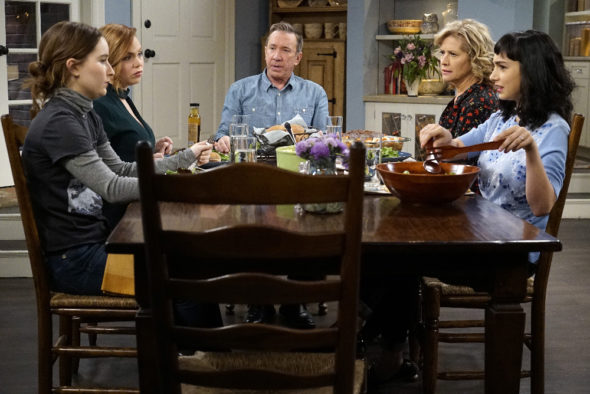 As of reporting, it’s unclear if Kaitlyn Dever, Molly Ephraim, or Flynn Morrison will join the rest of the cast for the new season.

Ryan needs to be a little more masculine especially because he is raising a son. That’s is all.

i’m really happy the show was picked back up by fox, it’s a great show. I hate to criticize an actor but I was very disappointed by the casting for the new mandy. even though every actor plays a role in their own distinctive style the changes are just way too drastic. she’s just too tall and her look is too different, from the petite beautiful brunette to the tall willowy blond. how are you going to put mandy in her heels, she’d be a foot taller than any other character and as fashionable as her character is, flats just… Read more »

Never understood why it was canceled. It was one few TV shows I watched. I think it was a political statement.

i love this show.but it really needs mandy and eve.they are two of my favorite carecters.mandy and kyle are my favs.boyd isnt my favorite at all he just doesnt fit.please please get them signed.

Hope everyone returns except kid that plays Boyd.

you can’t have Kyle without Mandy, especially since they’re married…wtf…it’s not like these people are actively and regularly engaged in other commitments, right?

So very excited that Last Man Standing is returning! My husband and I love it!! Really hope Molly and Kaitlyn return as the show won’t be the same without Mandy and Eve!!

Wonderful Sitcom. So glad it is returning

Can’t wait for the show to return. I truly hope Molly Ephraim and Kaitlyn Dever return, even if it is for occasional episodes. They really need Mandy and Eve.

Love love love this show and am so glad it is back! Definitely will be watching. Thank you FOX!

I’m glad to see the show coming back! Kudos to FOX for not playing the political games like ABC. I wouldn’t care if Mandy didn’t come back. Loose morals and even looser pants didn’t do much for the show. Eve can easily fit in as a part timer since she should be at the Air Force Academy. That storyline is worth supplementing a good number of episodes. Boyd is easily replaced with a kid that is a little older. Looking forward to it!