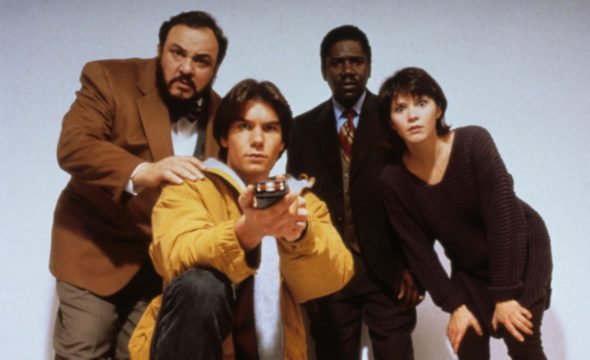 Do you remember Sliders making a comeback? According to FlickeringMyth, stars John Rhys-Davies and Jerry O’Connell are in talks to revive the FOX TV show.

The sci-fi series followed a group of “sliders,” who travel between parallel universes and learn about alternate versions of Earth. The cast included Rhys-Davies, O’Connell, Cleavant Derricks, and Sabrina Lloyds. The show ran on FOX from 1995 to 1997 and on Syfy from 1999 to 2000.

Per FlickeringMyth, Rhys-Davis says he and Jerry O’Connell are in talks with NBC to revive Sliders. The network has not confirmed the news, but you can listen to the interview with Rhys-Davies from Toronto Comic-Con below:

What do you think? Have you seen Sliders? Would you watch a revival?

I would watch it w/out a second thought! Sliders was a great TV Series! Surprised a Motion Picture was never made from it. It reminds me allot of Stargate long before it’s conception.

Did they Ever come back in contact with Wade?

Definitely I would love to see a revival of the series. I bought the complete series on DVD

Yes I would most definitely watch a renewal of Sliders.

Yes, reboot with original cast plus creator/writer Tracy Torme producing/show running. Pick up new story lines with the story line from the episode that had Zoe McClellan as the McConnell character’s double and antagonist who was sent sliding into a different dimension by McConnell’s character. They can be chasing each other through time and dimensions as opposing forces trying to either rule the universe (McClellan’s character) or stop any human from ruling the universes (McConnell and original cast). Would love seeing Sabrina Lloyd on a regular basis again. McClellan is also a favorite.

To make any new series, resolve the cliffhanger episode and guide us to the new.

I think they could still be sliding , along side their kids , I want the old cast back. Minus the brother character probably.

Yes loved the show how about having their children be the new sliders. I will miss Midnight Texas , Killjoys and Supernatural.

The original show went through so many cast changes, I am not sure how they could use the “children” of the sliders. Jerry O’Connell left the show for season 5. Charlie O’Connell was only in season #4 and Mallory was supposed to be a “combo” of Jerry and Charlie. Sabrina Lloyd was killed off by the Cro-Mags. John Rhys Davies was killed off in season 4 by Roger Daltrey. In the end, only Clevant went through the last portal. It would have to be a reboot or it would have to pickup after season 3. It doesn’t matter because whatever… Read more »

The real professor did not slide. His clone did. So the clone was shot.
And Quinn is stuck between worlds.
Rembrandt could have went back to school fro physics and he built his own sliding device.

I loved Sliders. I would like to see a remake!