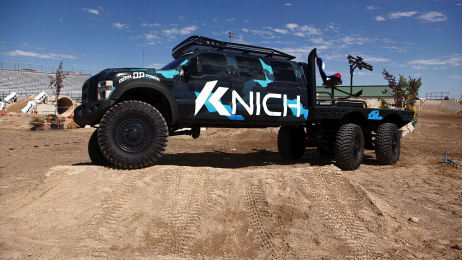 The Diesel Brothers are back in action! Discovery Channel just announced the TV show is returning for a fifth season in April.

The docuseries follows Heavy D, Diesel Dave, and their team as they restore and repurpose old diesel trucks. The new season will see the crew attempt some of their biggest builds yet.

Heavy D, Diesel Dave, The Muscle, and Redbeard are back for an all new season of DIESEL BROTHERS premiering Monday, April 8 at 10pm ET/PT on Discovery Channel. Jam packed with extreme builds, tricked-out trucks, and jaw-dropping stunts, this season showcases more of the iconic pranks, builds, giveaways, and hijinks that made them television sensations around the world.

This season, the Diesel Brothers continue to blur the line between work and play, committed to the biggest builds they’ve ever attempted, yet willing to drop everything for a game of dodgeball. One of their first builds is a mammoth undertaking, in which they transform an old Canadian logging truck into a custom semi that can transport their diesel creations around the country with enough room for all the bros. They execute the biggest giveaway to date, offering up two trucks named Rage and Chaos. They even get airborne after being commissioned to create a diesel-powered helicopter bucket to spread fertilizer up in Oregon. The DIESEL BROTHERS crew have officially kicked things into high gear.

In true DIESEL BROTHERS fashion, the fun doesn’t stop with the big builds and tricked out diesel machines. This season features the biggest stunts we’ve seen to date, as Heavy D works with his friends at Monster Jam in an attempt to set a world record in what is bound to be the craziest stunt in the history of DIESEL BROTHERS. Heavy has big plans for his Monster Jam truck, the BroDozer. This high flying, nerve-wracking live event will be one fans won’t want to miss.

What do you think? Have you seen Diesel Brothers? Will you watch the new season?

I like the show for what they have talked about diesels. I have learned diesels for service work and things I could do with diesels. It beens nice to see them help out people when possible. I’ve gone to monster jam in SLC Utah. Me a d my wife through line for autograph. Heavy d and diesel Dave were the last persons in the line. We talked with them and I talked alot about diesels and I was not able to watch brodoser came out. We talked about 10 minutes or so and they focused on us and not their… Read more »

Hi, My husband and son are mechanics a lot of experience on diesel engines and the hydraulics They both are experienced on Piston Bullys and other snow cats used in the ski industry. Experience on snow plows and other diesel trucks. We were watching an episode you had on that showed them attaching a blade on to a old military truck for plowing snow. The blade a V plow was used. My son and husband both commented that the blade would not hold up. Too small for the truck and not as strong as a straight blade. If they stay… Read more »

Great Show! Nice twist instead of just cars and motorcycles. My vote is to keep more of all the above on you programming in the future

From Cleveland Ohio still like the show and diesel power. Retired navy so I like the duce and a half motor sound. If I ever hit the lottery I will have them built me a truck.