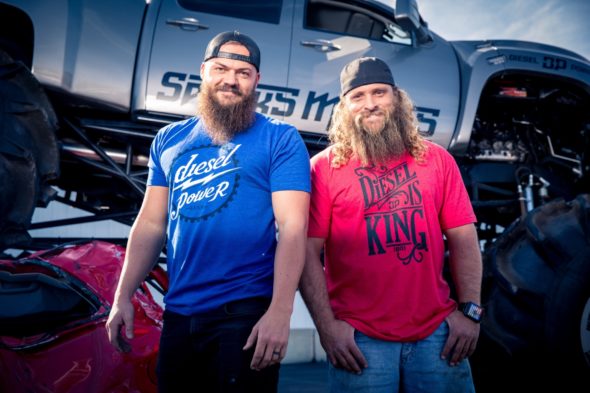 Time to get ready for a new season of Diesel Brothers. Discovery has announced the premiere date for the new season. A new special is set to launch on Memorial Day, and the series will return with its new season next month.

Discovery Channel revealed more about the premiere in a press release. Check that out below.

Each week on DIESEL BROTHERS: DIESEL NATION, the Diesel Brothers will be joined by a few familiar faces for epic interviews, such as Discovery’s Chris Jacobs, NBA All-Star Shaquille O’Neal and DEADLIEST CATCH’S Jonathan Hillstrand, as they kick back in their garage and bring non-stop entertainment to all of Diesel Nation.

Setting the stage for the new series, the Memorial Day premiere episode of DIESEL BROTHERS: DIESEL NATION sees the guys looking back at the high-flying epic live stunt from last year’s MONSTER JUMP LIVE and reminiscing on their record-breaking, gravity-defying stunts. Featuring guest appearances by some of the MONSTER JUMP LIVE crew, including Tanner Godfrey, Todd LeDuc and pilot Anthony Oshinuga, the Diesel Brothers once again salute the men and women of the Armed Forces and military families. The weeks to follow will feature shows dedicated to what to do during a Zombie Apocalypse, an episode featuring all their celebrity clients, and a look forward to some exciting Diesel Brother’s news.

Following the premiere of DIESEL BROTHERS: DIESEL NATION, fans can catch the bros getting up to their usual hijinks with brand-new episodes of DIESEL BROTHERS premiering Monday, June 22 at 10pm ET/PT. Filled with more mega builds, epic stunts, and iconic pranks than ever before, Heavy D, Diesel Dave and The Muscle continue to blur the line between work and play.

When Todd LeDuc challenges the Diesel Brothers to a desert race and picks Muscle to be on his team, Heavy D and Diesel Dave need to work in overdrive to get their unfinished F100 in race-ready condition. Also this season, Heavy D and Diesel Dave travel to Monster Jam in Florida to unveil Diesel Dave’s ‘Monster Truck Bro Camino,’ and Mad Scientist Sam later builds a diesel-powered monowheel vehicle known as ‘The Kracken’ with two tentacle like wheels. With more stunts, builds, pranks and dad jokes than ever, Monday nights are guaranteed to be trucking huge.”

Check out a trailer for the new season now.

I’m looking for a business partner for my business AJ’S ADVANCED AUTO DIESEL SERVICE CENTER, my new boat marina I’m purchasing and relocating my business.
Maybe we can do a show together ?
I’m serious about this! I need help. I’ve contacted Diesel BROTHERs via email and messenger. Please contact me.
Thank you