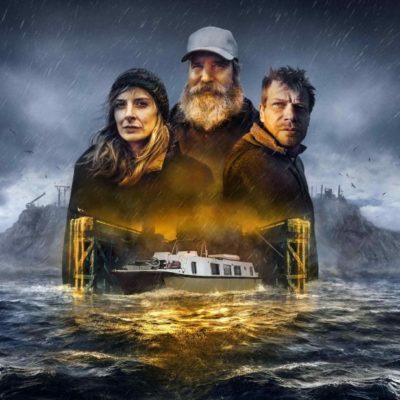 Discovery is headed back up to Alaska. The network just announced the premiere date for season 14 of Bering Sea Gold.

The docuseries follows miners searching for gold in the waters surrounding Nome, Alaska. The new season will see miners “dive under a solid sheet of Bering Sea ice to stay on the trail of gold.”

Los Angeles, CA) In Nome, Alaska there is an estimated two billion dollars’ worth of gold waiting to be discovered in the most unlikely of places. In the depths of the frigid, unpredictable Bering Sea, miners are willing to risk it all for the chance to strike it rich. As competition grows fiercer, these miners return to the sea and surrounding shores with new sights in mind: to seek redemption, build an empire, or for some, to defend their crown… even if that means diving well into winter, something they haven’t done in years… when 20 below zero is considered a warm day. The all-new season of ‘BERING SEA GOLD’ premieres Wednesday, April 1 at 9pm ET/PT on Discovery Channel.

For these miners, the key to survival is in their ability to adapt as they will be forced to employ all new technology and tactics to not only go up against the brutality of Mother Nature, but also each other in order to stake new claims. Following a record-breaking heat wave in Nome, the clock is ticking as the sediment on the ocean floor begins to kick up, putting all of their known claims at risk. But the ocean floor isn’t the only adversary. Last season, Shawn Pomrenke, the former ‘Mr. Gold,’ was knocked off his throne by Ken Kerr and left him stuck on shore with a bad business deal, while Kerr went to stake his dominance.

The Eroica captain, Emily Riedel, also has a secret weapon this season; she’s brought diver Daryl Galipeau back into the game in the hopes of venturing into untouched areas and rising up against her competitors. Kris Kelly heads into this season ready to find new ground and expand his empire without anyone getting in the way. With an offer for new equipment, the stakes are high as he must “go big or go broke” to finally join the ranks of the mega-miners. Vernon Adkison is back exploring the next big gold strike along with his daughter Elaine who hopes to learn from the best. With everything at stake in Nome, is the Bering Sea big enough for each of these miners to find success? This season, there’s no telling which way the tide will turn.

And later this season: when winter sets in and the Bering Sea freezes over, for the first time in years the miners will dive under a solid sheet of Bering Sea ice to stay on the trail of gold. At less than 2 feet thick in spots, the ice is barely what most miners consider safe enough. So the question is: How long will this year’s ice even last, and how much is each miner willing to risk as they attempt the most dangerous and unpredictable ice mining season on record?

Ahead of the season premiere, viewers can tune in to a BERING SEA GOLD special at 11 PM ET/PT on March 25 to get caught up on all things gold.

In addition to watching the series on Discovery, viewers can check out new episodes each week by downloading the Discovery GO app. Viewers can join the conversation on social media by using the hashtag #BeringSeaGold and follow Bering Sea Gold on Facebook, and Discovery on Instagram, and Twitter for the latest updates.

Bering sea gold was not on April 1 or the guide on direct tv was wrong.whats up?

The article is incorrect. On Discovery’s website, it states the beginning of Season 14 on May 8, 2020, with a catch-up type show on the 1st of May, as well.

Too bad we don’t get to see the only real successful offshore mining operations of the Casadepaga. Everybody could learn from them.