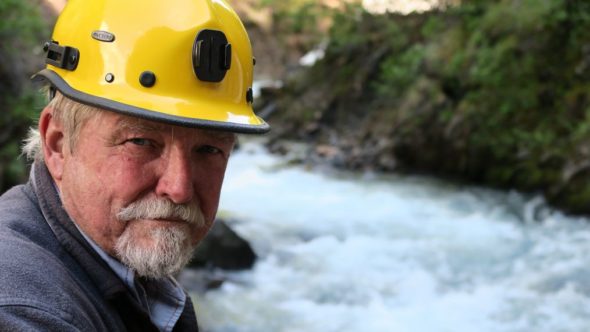 Discovery is headed back up to Alaska. The network just announced the season three premiere date for Gold Rush: White Water.

The docuseries follows father-son duo Fred and Dustin Hurt as they mine for gold in the chilling glaciers of Alaska.

(LOS ANGELES) – Deep in the Alaska wilderness, the Dakota boys are back and risking it all to unearth millions in gold. But after mining together for 10 years, the father and son team of Fred and Dustin Hurt are splitting up and working on separate claims to double their chances of striking it rich. The race is on as they uncover more gold than any other season before. From the producers of GOLD RUSH, Discovery’s #1-rated show, GOLD RUSH: WHITE WATER returns for its third season on Friday, November 8 at 10 PM ET/PT on Discovery.

Last season, the Dakota Boys reached their limit and completely mined out their McKinley Creek dive site. This led the pair to head further up and prospect new mining sites on Cahoon Creek, 2,000 feet high up the remote Chilkat Mountains in southeast Alaska.

Now for the first time, father and son are separating and running their own crews as they move higher up the mountain – chasing the mother lode and a massive pay day. But the higher up they go, the more dangerous it gets. As they head deeper into the hostile Alaskan wilderness, they’ll risk their lives battling hungry bears, falling rocks and boulders, and raging currents, searching for a monster payday.

With such a remote location, the teams have to “sling in” all their gear and equipment using a helicopter. Once the final drop is made, the Dakota Boys are on their own – forcing them to engineer radical new methods to lift 1,000-pound boulders, lower their dredges down vertical cliffs and fix catastrophic equipment failures in the middle of nowhere. They’re putting it all on the line in the pursuit of giant nuggets and a life-changing jackpot of gold.

The pressure is on. But can the Dakota Boys and their team of miners tame the wilderness, strike gold and make it out unscathed?

In addition to watching the series on Discovery, viewers can check out new episodes each week on DiscoveryGO. Viewers can join the conversation on social media by using the hashtag #GoldRushWhiteWater and follow Gold Rush on Facebook, Instagram, and Twitter for the latest updates.

What do you think? Have you seen Gold Rush: White Water? Will you watch the new season?

I haven’t missed an episode.

Whitewater is a waste of time and can’t stand the characters. Lost Gold with Dozer Dave is more believable. Dakota boys don’t find squat and have no clue. They would not be prospecting if not for Discovery channel. Kill the Show!!!!

Why was episode 8 not shown on 31 December

Why doesn’t gold rush white water show up on on the 8th? I have dish. Last year is was labeled on the guide with gold rush. Is that going to be the same this year

Dicogery has SO MANY REPEATS GOING we get confused so we have given up ,so many repeats