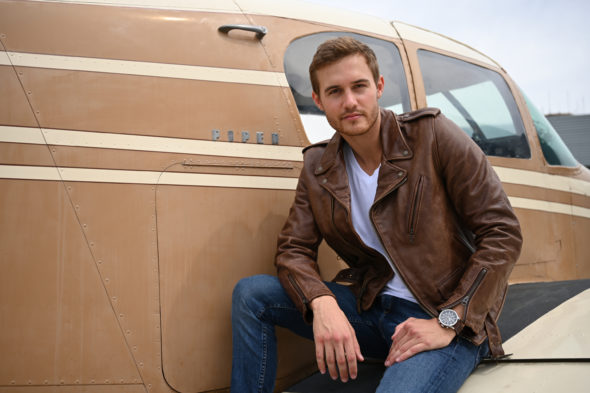 Will there be lots of turbulence for this airline pilot in the 24th season of The Bachelor TV show on ABC? As we all know, the Nielsen ratings typically play a big role in determining whether a TV show like The Bachelor is cancelled or renewed for season 25. Unfortunately, most of us do not live in Nielsen households. Because many viewers feel frustration when their viewing habits and opinions aren’t considered, we invite you to rate all of the 24th season episodes of The Bachelor here. *Status update below.

An ABC dating reality TV series, The Bachelor is hosted by Chris Harrison. Season 24 follows 28-year-old airline pilot Peter Weber, as he meets, courts, and weeds out 30 potential “soul mates” in his quest for “true love.” Weber previously competed during the 15th season of The Bachelorette where Hannah Brown ended their relationship. His journey will continue internationally and take Weber to Costa Rica, Chile, Peru. and beyond. Will Weber open his heart and find the woman of his dreams who will love him back? Guests this time around include country singer Chase Rice, fashion expert Carson Kressley, model Janice Dickinson, Bachelor in Paradise’s Demi Burnett, and comic actor Fred Willard.

What do you think? Which season 24 episodes of The Bachelor TV series do you rate as wonderful, terrible, or somewhere between? Do you think that The Bachelor should be cancelled or renewed for a 25th season on ABC? Don’t forget to vote, and share your thoughts, below.

I think this season was the worst of all seasons and I have watched from the beginning. Hannah B. in the beginning crying her eyes out???? My guess Peter would have stopped and went with Hannah B. right then. BUT where would that leave the show? And why not stay and party and whatever? He chose or was told to go to finish line BUT I am betting Hannah B. will be back. He and Mattie will never work and I thought his mom was funny and correct about his failing to succeed. She seemed so disgusted. I felt the… Read more »

Always renew the Bachelor/bachelorette, bachelor in paradise and everything that has to do with this franchise.
This season with Peter was by far the most stressful season to watch , to much drama which made me have to watch a show in parts.
I am a true romantic and have watched every season since the first.
When I realize it’s Monday and the show is on at night I get excited. Hoping for more more and more!! Never cancel

Like watching a train wreck! Yet somehow you are compelled to keep watching! I find it hilarious,never seen so many cry babies and never heard the word”like” used in such rapid succession before LOL I watch just for the laughs,takes your mind off of real life LOL I will keep watching if they keep running it Good for the laughs.

I’m praying that Nexstar TV doesn’t stop this season from airing at any time. They did that with DirecTV last season. It wasn’t DirecTV’s doing for once, it was Nexstar TV wanting a lot of money to broadcast our local ABC station. We only got to watch the 1st part of last season. Have new TV’s, but can’t get my local stations even with an antenna. Needless to say we couldn’t watch the ending either. I’m happy to see Peter as the Bachelor and can’t wait to see the whole season!! I just don’t want to see Hannah Brown on… Read more »

How come every time it is on , you have collected the most immature females on earth ? I don’t understand that . They are ALWAYS crying and here comes cry baby Hanna B . Crying …. I cannot believe all of these men want relationships with high school females . I use to think it was fun to watch, but not so much anymore , Hanna B season ruined it for me .

I just read that this is mostly faked. No, I haven’t watched this since 2001.

I haven’t watched a single season and never will

Can NOT stand this show, so I don’t watch it! Hard up people trying to find “love”(?) give me a break! They all need to find help in the psychology department. They are all losers trying to find their true love loser. Geez it’s so sickening. Take it off tv. It’s getting old!!