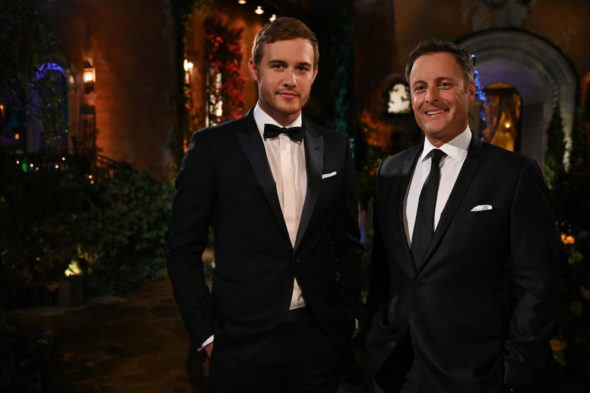 Will Peter Weber find a mate while ABC finds ratings gold? Has The Bachelor TV show been cancelled or renewed for a 25th season on ABC? The television vulture is watching all the latest cancellation and renewal news, so this page is the place to track the status of The Bachelor, season 25. Bookmark it, or subscribe for the latest updates. Remember, the television vulture is watching your shows. Are you?

Airing on the ABC television network, The Bachelor is hosted by Chris Harrison. Season 24 follows 28-year-old airline pilot Peter Weber, as he meets, courts, and weeds out 30 potential “soul mates” in his quest for “true love.” Weber previously competed during the 15th season of The Bachelorette where Hannah Brown ended their relationship. His journey will continue internationally and take Weber to Costa Rica, Chile, Peru. and beyond. Will Weber open his heart and find the woman of his dreams who will love him back? Guests this time around include country singer Chase Rice, fashion expert Carson Kressley, model Janice Dickinson, Bachelor in Paradise’s Demi Burnett, and comic actor Fred Willard.

The 24th season of The Bachelor averaged a 1.81 rating in the 18-49 demographic and 6.40 million viewers. Compared to season 23, that’s down by 3% in the demo and down by 2% in viewership. Find out how The Bachelor stacks up against other ABC TV shows.

Will ABC cancel or renew The Bachelor for season 25? Though the ratings have fallen over the years, this show has remained a top draw for the network. I’m sure it will be renewed. I’ll update this page with breaking developments. Subscribe for free alerts on The Bachelor cancellation or renewal news.

What do you think? Are you glad that The Bachelor TV show has been renewed for a 25th season? How would you feel if ABC had cancelled this TV series, instead?

I would be elated if the Bachelor was cancelled! It has to be the most insulting , the most boring and dumbest show on television. Enough already!

Vapid TV at its best !
Take it away – it is and always has been the most idiotic show ever – there are others but these people make and female are boring and flakey. What sane person would want their trials and tribulations of finding a mate televised . It’s sick and it’s dumb and I watched about two episodes early on and was bored it tears. Couldn’t even watch it as comedy because it wasn’t even funny — just sad !

I agree. It is a stupid, ridiculous show that should go away and NEVER be seen again EVER! It’s bad enough to be rejected by a boyfriend/girlfriend but why would you want to be rejected in front of millions of people? And some of the women act like their life will be over if that guy doesn’t choose them which is absolutely not true.