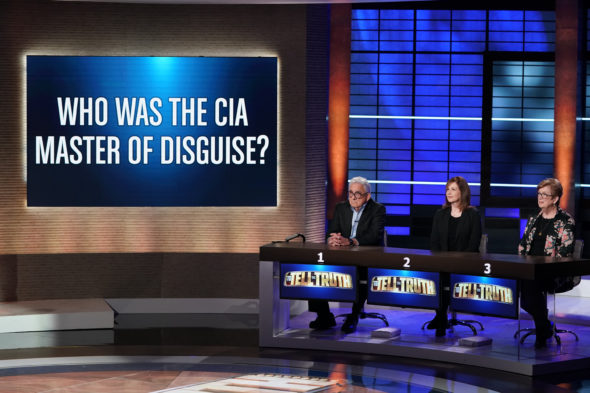 Be honest. Do you like this show?  Has the To Tell the Truth TV show been cancelled or renewed for a sixth season on ABC? The television vulture is watching all the latest cancellation and renewal news, so this page is the place to track the status of To Tell the Truth, season six. Bookmark it, or subscribe for the latest updates. Remember, the television vulture is watching your shows. Are you?

The fifth season of To Tell the Truth averaged a 0.55 rating in the 18-49 demographic and 3.25 million viewers. Compared to season four, that’s down by 5% in the demo and down by 8% in viewership. Find out how To Tell the Truth stacks up against other ABC TV shows.

Will ABC cancel or renew To Tell the Truth for season six? The ratings aren’t great but game shows have become a summer tradition on ABC. I suspect this series will be renewed. I’ll update this page with breaking developments. Subscribe for free alerts on To Tell the Truth cancellation or renewal news.

What do you think? Are you glad the To Tell the Truth TV show has been renewed for a sixth season? How would you feel if ABC cancelled this TV series, instead?

I agree, this show was far the most fun., because the type of jobs that were presented.,more entertaining than watching people win big money.

Enjoy the lightness of the show, that it is easy to watch, fun to guess, great for our family, and Momma is a warm feeling addition.

Love this show
Laugh hysterically to point we could pee in our pants. Always need a great laugh.

To Tell The Truth Is By Far The Very Best One Hour Of A Game Show I Ever Watched. .I Can’t Believe I Am The Only
One That Shares That Opinion .

I do not understand why Doris is on the show. She adds nothing. Also the MC needs to work on his horrendous laugh. I tape the show so I can fast forward through the MC and his mother. I find them both annoying. The old version was the best. This one has just become plain silly.