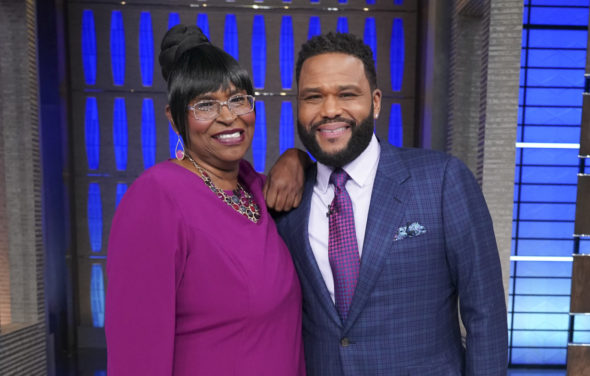 Are viewers ready for more fibbing? Has the To Tell the Truth TV show been cancelled or renewed for a seventh season on ABC? The television vulture is watching all the latest cancellation and renewal news, so this page is the place to track the status of To Tell the Truth, season seven. Bookmark it, or subscribe for the latest updates. Remember, the television vulture is watching your shows. Are you?

Airing on the ABC television network, To Tell the Truth is hosted by Anthony Anderson. The show features a panel of four celebrities who are presented with three people who all claim to be the same person with the same incredible talent, job, or achievement. One is sworn to tell the truth, while the others are not. Anderson’s Mama Doris returns with commentary. Panelists in season six include Jimmy Kimmel, Andrea Savage, Sherri Shepherd, Lil Rel Howery, Adam Rodriguez, Nikki Glaser, Joel McHale, Cedric the Entertainer, and Malin Åkerman.

The 2021-22 portion of the sixth season of To Tell the Truth averaged a 0.29 rating in the 18-49 demographic and 2.02 million viewers. Compared to season five, that’s down by 48% in the demo and down by 38% in viewership. Find out how To Tell the Truth stacks up against other ABC TV shows.

Will ABC cancel or renew To Tell the Truth for season seven? This show has been around for quite a few years and is typically one of the lower-rated game shows on the network. ABC has picked up some new shows this season so, the network may be getting ready to eliminate a few. I think that To Tell the Truth will be renewed but wouldn’t be surprised if it was cut either. I’ll update this page with breaking developments. Subscribe for free alerts on To Tell the Truth cancellation or renewal news.

What do you think? Are you glad that the To Tell the Truth TV show has been renewed for a seventh season? How would you feel if ABC had cancelled this TV series, instead?

Yes! That show is one most educational and comical shows ever. It also allows the audience to see celebrities in a more relaxed and transparent setting..while engaging the audiences in the fun filled process of derterminibg who is “Telling the Truth” ?! Anthony Anderson and his Mother Ms. Doris are phenomenal. I love to see the shock and surprise on the faces of the celebrities when the contestants they least expect allude them with their own acting abilities and reveal their amazing gifts and talents. I totally enjoy this show, my 87 year old Mother loves this show as well… Read more »

Anthony Anderson confirmed on Celebrity Wheel of Fortune that he just finished filming the 7th season.

Keep this show around it is funny. Find a good time slot and leave it there. The ratings will grow.

Please please renew To Tell The Truth. . Forever!
I love that show i cant imagine who wouldn’t .
Its entertaining and decent and i look forward to it weekly. In fact put on repeats also other days of week if you could . Thank you ty ty
Like the Seinfeld show. It never gets or boring to me.

It’s an enjoyable show. The contestants have an interesting story. I do hope we can see another season.

I love the new version of To Tell the Truth. The show has been around for a long time and it is a joy to watch.

Please bring this show back, my adult children come over and eat dinner and we laugh and watched this family show. We need more funny and clean family shows.

Please renew To Tell The Truth. Love this program ‼️‼️‼️

I just started watching the show last season and love it! The host and panelists are hilarious! Please renew To Tell the Truth!

Yes thats true. Why don’t you listen to the people? Ty

I have an unbelievable story

Love to tell the truth is it coming back on June 6? or if not please tell me when thank you

What happened to Marlon Winn for destroying beanie bear