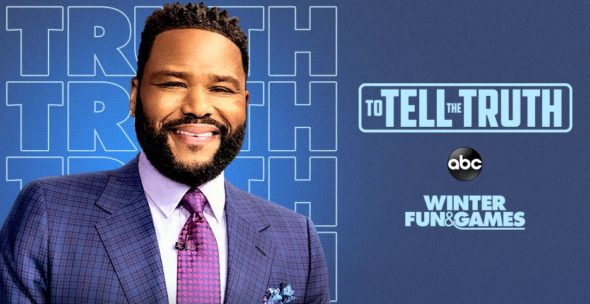 ABC has had some success in the ratings by introducing a number of game shows to its schedule. In part because of the pandemic, the network has introduced several new ones this season so, they may be looking to drop some of the older ones when things get back to normal. Will To Tell the Truth be cancelled or renewed for season seven? Stay tuned.

A revival of the classic game show, To Tell the Truth is hosted by Anthony Anderson. The show features a panel of celebrities who are presented with three people who all claim to be the same person with the same incredible talent, job, or achievement. One is sworn to tell the truth, while the others are not. Anderson’s Mama Doris returns with commentary. Panelists in season six include Jimmy Kimmel, Andrea Savage, Sherri Shepherd, Lil Rel Howery, Adam Rodriguez, Nikki Glaser, Joel McHale, Cedric the Entertainer, and Malin Åkerman.

For comparisons: Season five of To Tell the Truth on ABC averaged a 0.56 rating in the 18-49 demographic and 3.25 million viewers.

What do you think? Do you like the To Tell the Truth TV series on ABC? Should it be cancelled or renewed for a seventh season?