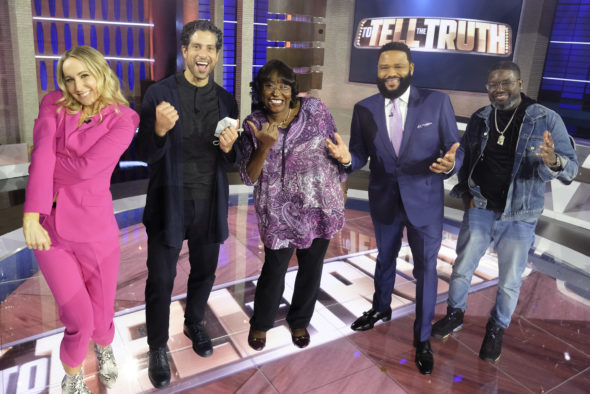 Who can lie the most convincingly in the sixth season of the To Tell the Truth TV show on ABC? As we all know, the Nielsen ratings typically play a big role in determining whether a TV show like To Tell the Truth is cancelled or renewed for season seven. Unfortunately, most of us do not live in Nielsen households. Because many viewers feel frustration when their viewing habits and opinions aren’t considered, we invite you to rate all of the sixth season episodes of To Tell the Truth here.  *Status Update Below.

An ABC game show, To Tell the Truth is hosted by Anthony Anderson. The show features a panel of celebrities who are presented with three people who all claim to be the same person with the same incredible talent, job, or achievement. One is sworn to tell the truth, while the others are not. Anderson’s Mama Doris returns with commentary. Panelists in season six include Jimmy Kimmel, Andrea Savage, Sherri Shepherd, Lil Rel Howery, Adam Rodriguez, Nikki Glaser, Joel McHale, Cedric the Entertainer, and Malin Åkerman.

What do you think? Which season six episodes of the To Tell the Truth TV series do you rate as wonderful, terrible, or somewhere between? Do you think that To Tell the Truth should be cancelled or renewed for a seventh season on ABC? Don’t forget to vote, and share your thoughts, below.

I loved To Tell the Truth. Tired of seeing all the blood and guts shows. It’s one police, Medicshow after another. Nice to have something we at home can play along with. Please bring it back.

The show was enjoyable. I hope they are able increase number of judges back to 4 if there another season.

I really like Anthony Anderson and the Celebrity guest stars that appear on the show weekly.

OH for heaven’s sake…. another re-do of a 1950’s tv program? Come on… aren’t there ANY new ideas floating around? No, I won’t watch it.