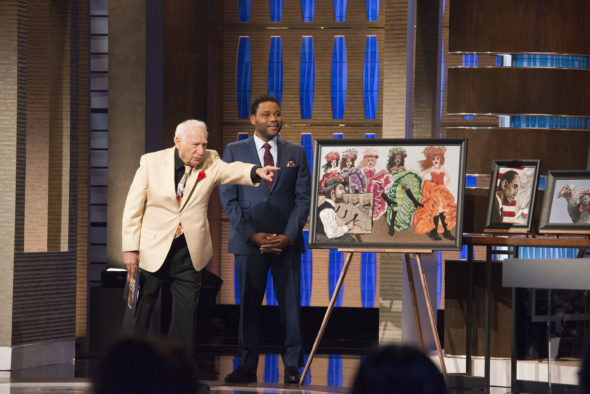 It’s time to come clean. What do you think of the third season of ABC’s To Tell the Truth TV show? We all know the Nielsen ratings typically play a big role in determining whether a TV show like To Tell the Truth is cancelled or renewed for season four. Unfortunately, most people don’t live in a Nielsen Household. Because many viewers feel frustrated that their viewing habits and opinions aren’t considered, we’d like to offer you a chance to rate the season three episodes. **Status update below.

An ABC game show, To Tell the Truth is an updated version of the classic TV panel game show. Black-ish star Anthony Anderson hosts a panel of four celebrities. They meet three people, all of whom claim to be the same person, with the same incredible talent, job, or achievement. Only one has sworn to tell the truth. The celebrities try to deduce which one is who they say they are. Season three panelists include Octavia Spencer, Dermot Mulroney, Nikki Glaser, Gabby Douglas, Mel Brooks, Joel McHale, Bill Hader and Natasha Leggero. Anderson’s mother, Doris, returns with commentary, too.

What do you think? Which season three episodes of the To Tell the Truth TV series do you rate as wonderful, terrible, or somewhere between? Should this ABC game show have been cancelled or renewed for a fourth season? Don’t forget to vote, and share your thoughts, below.

**8/7/2018 Status Update: To Tell the Truth has been renewed for season four on ABC. Details here.

I want to tell the truth to be renewed